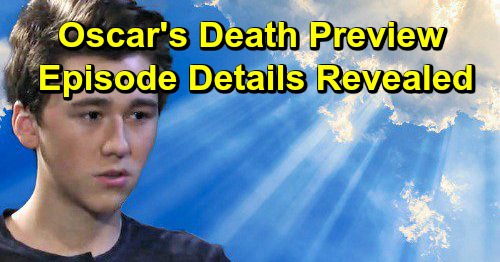 General Hospital (GH) spoilers tease that the end is in sight for dying Oscar Nero (Garren Stitt). His condition is already rapidly declining, but things will truly head south on May 1. GH will deliver a special episode that’s all about Oscar and his loved ones, so it seems Oscar could draw his last breath as this tearful tribute wraps up.

We’ve got the latest info on Oscar’s death and the touching scenes that’ll come before it, so let’s take a look at what’s set to happen. For starters, Olivia Quartermaine will have memories on her mind. She doesn’t know Oscar very well, so she hasn’t made enough memories for that to be about him. However, Oscar’s imminent demise may remind Olivia of other loved ones who have passed away.

Meanwhile, Elizabeth Baldwin (Rebecca Herbst) will reach out to Dr. Terry Randolph (Cassandra James). Terry is a professional who’s surely lost plenty of patients throughout her career. However, losing this one could hit harder than the others. Terry works with Dr. Kim Nero (Tamara Braun) at GH and Liz has a personal connection to Drew, too. Dr. Randolph will hate that it had to be like this.

Terry has also gotten to know Oscar, who’s clearly one of the sweetest teens around. He didn’t deserve such a grim outcome, but sometimes life isn’t fair. Over with Kim, she’ll be grateful when Julian Jerome (William deVry) gets in touch. He won’t want to overstep during this excruciating time for her family, but Kim will insist that she needs him. She’ll be glad to have Julian to lean on for what’s ahead.

Other General Hospital spoilers say Trina Robinson will be there for Cameron Webber (William Lipton). She’ll make Cam an offer, which will involve some form of assistance. It looks like they make do something special for Oscar just before he dies. You can bet Josslyn Jacks (Eden McCoy) will be deeply moved by her friends’ efforts.

There’ll naturally be some surprises thrown in as well, but this definitely sounds like a heartbreaking episode. We’ll give you updates as other GH news comes in. Stay tuned to the ABC soap and don’t forget to check CDL often for the latest General Hospital spoilers, updates and news.