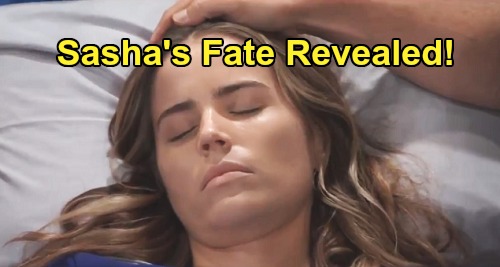 General Hospital (GH) spoilers tease that Sasha Gilmore (Sofia Mattsson) will fight for her life. She’s become quite sick thanks to Cassandra Pierce’s (Jessica Tuck) sneaky plan. Cassandra injected Sasha’s grapefruit with the virus that caused this influenza, which landed Sasha at GH. Hamilton Finn (Michael Easton) has put Sasha in isolation, but can he find a cure for this condition before Sasha dies?

Finn has been called in by Lucas Jones (Ryan Carnes) to consult on Sasha’s case. Unfortunately, Finn has never seen this type of influenza before and has no idea how to treat it. Although Finn is an infectious disease specialist, there are no guarantees. Finn may struggle to cure Sasha before time runs out.

Sasha’s got a high fever, so there are some serious risks here. Can Sasha’s life be saved or will she pay a steep price for pretending to be Nina Reeves’ (Cynthia Watros) daughter? Sasha’s lie got her into this mess, although she doesn’t know it just yet.

Cassandra Pierce Is Using Sasha Gilmore For A Revenge Plot

Sasha is innocent in this dangerous fight between Nina and Cassandra. Nina almost killed Cassandra when she drugged her to save Finn and put her in a coma. Now that Cassandra is free and has met Sasha, who’s posing as Nina’s daughter, Sasha has found herself a pawn. She’s caught in this tug-of-war between the two women.

Sasha’s lying to Nina about being her daughter, but death isn’t the right punishment for that. She doesn’t deserve to lose her life for helping Valentin Cassadine (James Patrick Stuart) give Nina a child. At this point, Sasha’s main reason for staying silent is protecting Nina’s heart. She also wants to keep her romance with Michael Corinthos (Chad Duell) intact, but sparing Nina’s feelings is important to her.

Since General Hospital fans know Cassandra is behind Sasha’s illness, does she have the cure for it? If so, what’s Cassandra going to want from Nina in exchange? Cassandra might expect Nina to sacrifice herself for her daughter. Then again, Cassandra might have some use for Valentin and demand to work together again.

Nina Reeves And Sasha Gilmore Share A Bond Based On Deception

If Cassandra targets Nina and tries to force into some plot, Valentin and Sasha might be tempted to come clean. The idea of Nina being in grave danger might push them to their limit.

However, Sasha and Nina have formed a genuine bond. It’s based on deception, but it’s a bond nonetheless. Nina will surely want Sasha saved no matter what. She’s not a heartless monster who’d want Sasha to perish for her mistakes.

Even so, General Hospital spoilers haven’t revealed the final outcome for Sasha. Will Sasha be killed off or survive this terrible ordeal? It looks like Sasha may pull through, but GH is always full of surprises! We’ll give you updates as other news comes in. Stay tuned to the ABC soap and don’t forget to check CDL often for the latest General Hospital spoilers, updates and news.