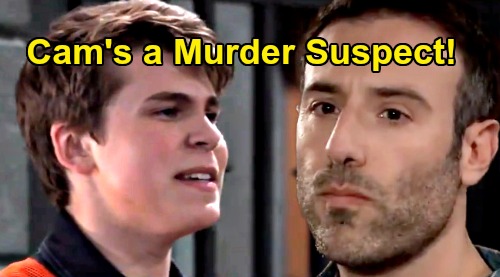 General Hospital (GH) spoilers reveal that Shiloh Archer (Coby Ryan McLaughlin) may have messed with the wrong teen. GH fans know Cameron Webber (William Lipton) has a wild streak in him. He’s been in trouble with the law on more than one occasion, but he’s been doing his best to settle down and focus on his community service.

However, Shiloh clearly stirred up something vicious within Cameron. His rage was evident when he tried to attack Shiloh at GH and had to be held back by Drew Cain (Billy Miller). Cam snarled that he’d make Shiloh pay for this. He refuses to just let Shiloh erase his stepfather, Franco Baldwin (Roger Howarth), and get away with it.

Drew tried to calm Cameron down and get through to him, but it won’t be long until Cameron’s riled up once again. On August 12, Cameron will share his harrowing tale with Josslyn Jacks (Eden McCoy). He’ll battle guilt over Franco taking his place, especially since this could cause so much pain for his family.

Once Franco wakes up, he’ll indeed have Drew’s memories. It doesn’t look like there’ll be a trace of Franco left – at least not right now. That should enrage Cameron once more. His heart will break for his distraught mother. Elizabeth Webber (Rebecca Herbst) will lose the beautiful bond she had with Franco. She’ll try to hold out hope that Franco will remember, but that hope may fade fast.

Likewise, Aiden Webber (Jason David) and Jake Webber (Hudson West) are going to be crushed. Cameron has finally been warming up to Franco, but Jake and Aiden have a truly special connection with him. Aiden may especially struggle since he’s so young and has dealt with bullying issues. The kid’s been through a lot already, so not having Franco’s support will be tough.

As Franco drifts toward Kim Nero (Tamara Braun), Cameron’s fury toward Shiloh should get another boost. Based on that outburst at GH, General Hospital spoilers say something big may be brewing. Of course, we also know that Billy Miller’s exit is coming up on August 23. There’s a reason the show had Drew warning Cameron and bonding with him a bit. It looks like it’ll involve a Shiloh shocker.

During the week of August 19-23, Shiloh will push for an exchange. He’s been taken into custody after violating his bail, so maybe he’ll make a deal and get some help at Pentonville. Is an escape plot brewing? Just imagine Cameron’s fierce anger if Shiloh makes his getaway! He could go after Shiloh in a frenzy.

Drew will rush to find Cameron on August 21, which is only a couple days before Miller’s last airdate. Whether Drew is presumed dead or perhaps disappears at Shiloh’s hands, Cameron may feel responsible. Basically, General Hospital will keep piling and piling on Cameron. It’s easy to see how he might reach his breaking point. There’s only so much one angry teen can take.

If the opportunity presents itself down the road, could Cameron keep his promise to make Shiloh pay? A murder mystery seems to be looming, so Cam is quickly rising on the suspect list! We’ll give you updates as other GH news comes in. Stay tuned to the ABC soap and don’t forget to check CDL often for the latest General Hospital spoilers, updates and news.