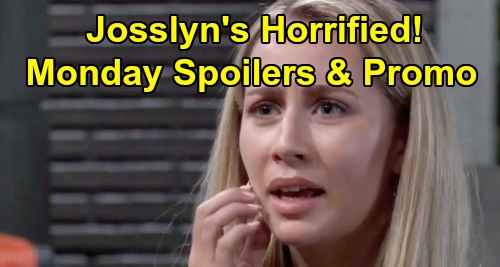 General Hospital (GH) spoilers for Monday, August 12, tease that Alexis Davis (Nancy Lee Grahn) will feel a bit abandoned. She understands Neil Byrne’s (Joe Flanigan) concerns, but she’ll still be miffed over the whole situation. Alexis will open up to Kevin Collins (Jon Lindstrom) about how it all went down. She’ll wonder how many times someone can be “fired” by her therapist!

Kevin may push Alexis to see that it was for the best. He’ll be happy to help Alexis in any way he can, but her mind will keep wandering back to Neil. Alexis would like to pursue something romantic with Neil, but he just doesn’t think that’s possible. All the mixed signals Alexis has been getting will leave her frustrated and confused about where they truly stand.

Meanwhile, Lucy Coe (Lynn Herring) will get updates on Kim Nero (Tamara Braun) and Julian Jerome’s (William deVry) plan to move. She’ll suggest that when one door shuts, another one opens. Lucy may not be able to sell Julian the Dawn of Day house, but she can help him sell Charlie’s Pub. Perhaps that’ll be what she’s getting at here.

Of course, Lucy may think the possibilities are endless for Julian and Kim, too. She’ll hope they find the fresh start they’re looking for, but not so fast! There’s a good chance this move won’t pan out – at least for Julian. Maybe not for Kim either since Franco Baldwin (Roger Howarth) will soon awaken with Drew Cain’s (Billy Miller) memories.

Until then, Kristina Corinthos-Davis (Lexi Ainsworth) will confront Julian about his plan to sell Charlie’s. She’ll likely worry about how Alexis will take the news that Julian wants to leave town. At GH, Elizabeth Baldwin (Rebecca Herbst) will get emotional by Franco’s bedside. She’ll insist Franco has to fight to wake up, but she’ll fear he won’t be the man he used to be if that happens.

Even so, Liz will try to trust in the power of their love. Franco promised he’d come back to Liz, and Cameron Webber (William Lipton) relayed the message. Liz will definitely cling to that promise on Monday and during the tough journey ahead.

Over with Josslyn Jacks (Eden McCoy), it looks like she’ll be irked with Cam for disappearing. She may think he just bailed on his friends, but Cameron will snap that he was busy getting kidnapped. General Hospital spoilers say Josslyn will be horrified, but she’ll be relieved once Cam shares exactly what happened.

Cameron will need support as he deals with all his guilt, but at least he’s alive. Joss already lost Oscar Nero Quartermaine (Garren Stitt), so her heart couldn’t take losing Cam, too. She’ll just be glad Cameron survived his ordeal with Shiloh Archer (Coby Ryan McLaughlin) and isn’t a Drew bot.

Oher General Hospital spoilers say Carly Corinthos (Laura Wright) will give Sonny Corinthos (Maurice Benard) some backup. He’ll prepare for a tough task, but Carly will insist he can do this. She’ll vow to be right next to him, so GH fans will get some nice “CarSon” moments. This may involve Mike Corbin’s (Max Gail) “wedding” to Ivonne Godfrey (Janet Hubert), which may be both sweet and heartbreaking.

It sounds like another gripping episode’s coming up. We’ll keep you posted as other GH details emerge. Stay tuned to the ABC soap and don’t forget to check CDL often for the latest General Hospital spoilers, updates and news.