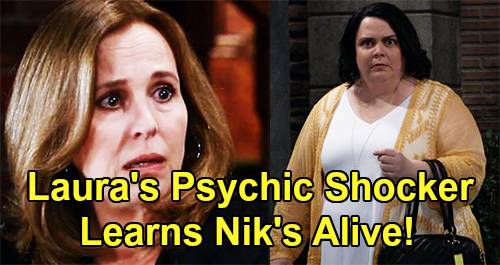 General Hospital (GH) spoilers tease that Ava Jerome (Maura West) is a true believer in her new psychic’s ability to “connect” with her deceased daughter. As GH viewers know, Ava had some success with her first psychic, Sibley Gamble (Veronica Cartwright), but ultimately the two didn’t get along that well.

Ava seems much happier with Chelsea Lam’s (Jen Ray) results, as she seems to have an easier time reaching Kiki Jerome (Hayley Erin) from the great beyond.

In the course of Ava’s work with her psychics, some interesting things have occurred. GH viewers will remember that at one point, Ava asked Sibley to “channel” Nikolas Cassadine (last played by Nick Stabile).

Hayden Barnes And Jasper Jacks May Have Found A Clue

But Sibley was unable to feel Nikolas’ presence. That was a big “hmmm” moment for viewers, who started to wonder if that was a clue that Nikolas might be alive.

Then, Hayden Barnes (Rebecca Budig) and Jasper “Jax” Jacks (Ingo Rademacher) were revealed as partners in a search for something in Wyndemere – something that could possibly have been left there by Nikolas. This, plus all the recent talk about Nikolas, has led to plenty of buzz in and of itself about a possible return of the character.

And now, Laura Collins (Genie Francis) has become involved in the Ava/psychic storyline. As GH viewers know, Scott Baldwin (Kin Shriner) has asked Laura to check up on Chelsea and her “services” in her capacity as mayor. It looks like we’ll soon be seeing some scenes between Laura and Chelsea.

Will Chelsea Lam Give Laura Collins A Psychic Reading?

So, does this mean that Chelsea will give Laura some sort of reading or channeling session, trying to contact Nikolas? It’s always possible that Laura might ask for a sample reading just to see what Chelsea’s schtick is all about. If that happens, then might we see a repeat of when Sibley tried to contact Nikolas with no luck? If Nikolas isn’t amongst the dead… then he must be alive!

Or perhaps Chelsea will have some sort of vision or psychic message for Laura about Nikolas, similar to the message she had for Franco Baldwin (Roger Howarth) when she advised him about taking a drive. Whatever the case, it seems that something intriguing is coming with respect to this future interaction between Chelsea and Laura.

Do you think that Laura will get some message from Chelsea about Nikolas being alive? Stay tuned to the ABC soap and don’t forget to check CDL often for the latest General Hospital spoilers, updates, and news.