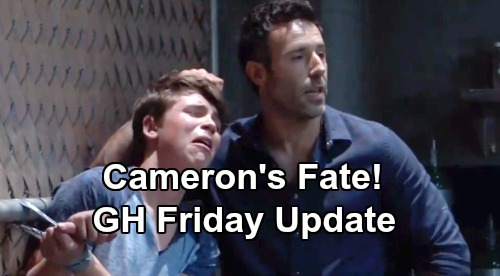 General Hospital (GH) spoilers update for Friday, August 9, tease that Shiloh Archer (Coby Ryan McLaughlin) will grow tired of delays. He’ll think Dr. Arthur Cabot (Time Winters) needs to pick up the pace on this procedure. Cameron Webber (William Lipton) will be a mess as he watches the shocking scene unfold. He’ll hate the fact that Franco Baldwin (Roger Howarth) is having to make such a huge sacrifice.

Shiloh will wonder how much longer it’s going to be, so the doc will confirm the process has started. Franco’s brain will be hooked up to a machine for the transfer, so he’ll soon become Shiloh’s memory-mapping victim. His own memories will be replaced by the memories of Drew Cain (Billy Miller).

Across town, Elizabeth Baldwin (Rebecca Herbst) will continue to fret over missing Cameron. She’ll be on the verge of a freak-out as she talks to Harrison Chase (Josh Swickard). Liz will decide she has to go out and find Cameron. She’ll be tired of waiting around, but Chase may argue that it’s too dangerous. He’ll likely want Liz to hang tight and let the police take care of this for her.

It seems Drew will try to soothe Liz’s concerns as well, but there’s clearly major danger going on. Cameron will remain safe, but Franco will end up in a coma after this tricky procedure. General Hospital spoilers say Liz will get a disturbing phone call on Friday. It sounds like she’ll realize Franco landed in the right place at the right time for Cam, but he’s paid the price personally.

Next week’s GH new episodes, August 12-19, will bring some rough moments as Liz waits for Franco to wake up at GH. Meanwhile, Nina Reeves (Cynthia Watros) will await word on Sasha Gilmore’s (Sofia Mattsson) condition. Hamilton Finn (Michael Easton) found out Sasha has a strain of influenza, but it’s not a common one. This strain is rare enough that Finn has never seen it before, so it’ll take some work to crack this case.

Lucas Jones (Ryan Carnes) will remain part of Sasha’s team, and he’ll give someone updates in Friday’s episode. Will Lucas fill Nina in on something else they’ve learned? Anything that puts Nina a step closer to Cassandra Pierce’s (Jessica Tuck) involvement would be a good thing.

However, Lucas could also have some updates for Willow Tait (Katelyn MacMullen). She’ll battle some confusion in Friday’s episode, so she’ll need some scenarios that might bring it. Of course, Willow’s misunderstanding could be the result of a chat with Lulu (Emme Rylan) instead. It appears Lulu will try to sell Willow on an idea and get turned down.

Willow will suggest she can let Lulu know if she has a change of heart. Lulu will feel like Willow’s mind is made up, but she’ll keep her options open anyway. Despite Lulu’s snag, at least she’ll be out and about. Lulu can’t hide away at home drinking; she has to rejoin the real world and try to make sense of this new chapter without Dante Falconeri (Dominic Zamprogna).

Other General Hospital spoilers say Peter August (Wes Ramsey) will get an earful from Robert Scorpio (Tristan Rogers). Robert will deliver some awful news, which Peter may get some blame for. Maxie Jones (Kirsten Storms) won’t think Peter should be held responsible for what happened with Dante or anything else Robert might come up with. She’ll reassure Peter after Robert calls him a dirtbag!