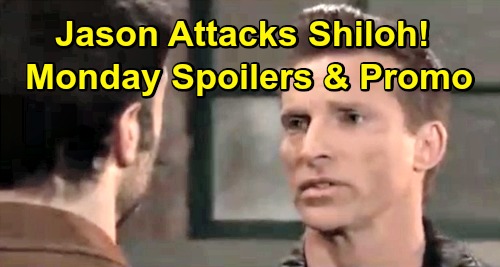 General Hospital (GH) spoilers for Monday, March 25, tease that Harrison Chase (Josh Swickard) will push Willow Tait (Katelyn MacMullen) to trust him. He’s figured out that Shiloh Archer (Coby Ryan McLaughlin) must be the father of Willow’s child. Chase will urge Willow to tell him all the details so he can help her. He’ll insist that the more he knows, the more he can do to protect Willow and her baby.

Willow will ultimately come clean about her history with Dawn of Day. She joined because of her parents and was later seduced by Shiloh. Once Chase hears the whole ugly story, he’ll contend that Willow can’t leave. Chase will feel like he can offer protection if Willow sticks around. He can’t control anything if she disappears, but Willow will still feel like it’s best if she flees.

Of course, something will inevitably change Willow’s mind sooner or later. She’s a huge part of several stories, so she has to be in town for some big reveals. In the meantime, Alexis Davis (Nancy Lee Grahn) will reach out to Kristina Corinthos-Davis (Lexi Ainsworth) and try to patch things up. The last thing Alexis wants is for Kristina to isolate herself and sink even further into DoD.

However, that’s exactly what Kristina intends to do. She’ll argue that her Dawn of Day family is the only one she can count on. General Hospital spoilers say Alexis will eventually give Jordan Ashford (Briana Nicole Henry) a call. She may wonder if there’s anything the PCPD can do about Shiloh. It’d certainly be worth digging around and seeing what they might find.

Over with Michael Corinthos (Chad Duell), he’ll talk to Sonny Corinthos (Maurice Benard) about Kristina’s drama. Michael will admit he’s worried about her. He’ll sense that Kristina isn’t thinking for herself anymore and that’s incredibly dangerous. Since Shiloh is running the show, Sonny will argue that they have to do whatever it takes to protect Kristina.

Outside Kelly’s, Jason Morgan (Steve Burton) will seethe over Shiloh’s presence around Danny Morgan (T.K. Weaver). He just spotted Shiloh trying to get chummy with the kid, so he’ll make it clear that’s not going to work. Jason will snarl that Shiloh should stay away from his son, but Shiloh will keep pushing. He may suggest Jason has no say in the people Sam McCall (Kelly Monaco) lets in Danny’s life.

General Hospital spoilers reveal that Jason will get arrested later this week, so it sounds like a physical fight may be looming. Since Shiloh tries to promote peace and keep his hands clean, he may take what Jason dishes out. That way he can file charges and force Sam to back him up.

At home, Lulu Falconeri (Emme Rylan) will be deeply disturbed. Dante Falconeri (Dominic Zamprogna) has obviously been through some rough stuff in Turkey. He’s got some terrible scars on his back and has admitted this assignment changed him. Unfortunately, Lulu will see just how much in Monday’s GH episode.

General Hospital spoilers say Dante will grab his gun and point it in Lulu’s direction. He’ll vow to complete the mission as Lulu asks what he’s doing. Dante will undoubtedly snap out of it, but the trauma he’s endured has taken a toll. This won’t be the last time Lulu gets startled by her husband’s behavior.

It looks like some gripping scenes are coming up. We’ll give you updates as other GH news emerges. Stay tuned to the ABC soap and don’t forget to check CDL often for the latest General Hospital spoilers, updates and news.