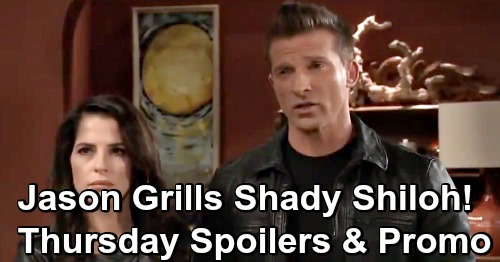 General Hospital (GH) spoilers for Thursday, January 3, tease that Jason Morgan (Steve Burton) will grow even more suspicious. He already met “Hank” (Coby Ryan McLaughlin), who introduced himself as an old buddy of Drew Cain’s (Billy Miller) from Afghanistan. Now Kristina Corinthos-Davis (Lexi Ainsworth) is introducing the same man as “Shiloh,” the guy who keeps order in the community house.

Jason repeat the name and flash a skeptical look in Shiloh’s direction. Sam McCall (Kelly Monaco) will seem confused by Jason’s reaction. She’ll wonder what’s going on, so Jason will undoubtedly explain the Drew link. Of course, Shiloh will likely pipe up that “Hank” is what Drew used to call him and not the name he prefers. He’ll have an answer for everything, but Jason will remain on edge.

The same goes for Sam, who’s already worried about Kristina and her trust in these people. She’ll be rattled in Thursday’s GH episode, so maybe some cult fears will start to emerge. In the meantime, Maxie West (Kirsten Storms) will help with a plan. After Lucy Coe (Lynn Herring) comes to her with a great idea, Maxie will quickly get on board with pulling it off.

Over with Scott Baldwin (Kin Shriner), he’ll give Monica Quartermaine (Leslie Charleson) some difficult news. It turns out Scott’s stepmom, Gail Baldwin (Susan Brown), has died. Monica and Scott both cared for Susan, so they’ll take a moment to mourn the loss together.

Other General Hospital spoilers say Kim Nero (Tamara Braun) will seek a shoulder to cry on. She’ll tell Elizabeth Webber (Rebecca Herbst) about her breakup with Julian Jerome (William deVry) and get some support. At Charlie’s Pub, Alexis Davis (Nancy Lee Grahn) will give Julian updates on Port Charles’ serial killer. In return, Julian may offer a few updates of his own.

General Hospital fans can expect Alexis to be anxious over Julian and Kim’s split. The idea of a single Julian running around may leave her with complicated feelings. Elsewhere, Marcus Godfrey (Nigel Gibbs) will urge Stella Henry (Vernee Watson) to butt out. He’ll insist that his marriage isn’t her business, so Stella may be forced to back off.

At the boxing gym, Mike Corbin (Max Gail) will tell Chet Driscoll (Chris Van Etten) about the lovely lady in his life. Poor Mike always forgets that Yvonne Godfrey (Janet Hubert) is married. Unfortunately, Yvonne always forgets as well. That’ll continue to make things complicated, but Sonny Corinthos (Maurice Benard) will help the only way he knows how – with a distraction.

Finally, Drew will open up to Curtis Ashford (Donnell Turner). Perhaps he’ll want to talk about his visit with Hank and his complex feelings for Kim. Drew doesn’t seem head over heels or anything, but there’s definitely a spark. He may wonder if he should pursue Kim after she’s had time to process her breakup.

Curtis will listen to his pal and hope he can assist him somehow. He always comes through for Drew when it counts! We’ll keep you posted as other GH details emerge. Stay tuned to the ABC soap and be sure to check CDL often for the latest General Hospital spoilers, updates and news.