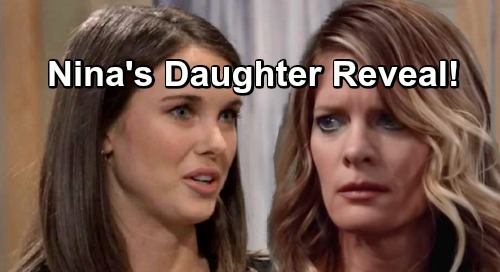 General Hospital (GH) spoilers tease that Valentin Cassadine (James Patrick Stuart) will keep his Liesl Obrecht (Kathleen Gati) under control. Some threats were tossed around during their last meeting, but Valentin and Liesl seem to have an understanding at the moment.

If Valentin loses Nina Reeves (Michelle Stafford) because of Liesl’s blabbing, he’ll hold nothing back in his quest for revenge. Fortunately, Liesl’s got other secrets to juggle.

She knows Nelle Benson (Chloe Lanier) swapped her baby with the dead one Brad Cooper (Parry Shen) and Lucas Jones (Ryan Carnes) adopted. Liesl will keep that secret for a while as well, but at least Valentin isn’t the only one she has power over!

Of course, Valentin will remain on edge about his Sasha Gilmore (Sofia Mattson) deception. If she isn’t Nina’s biological daughter, where’s the real one and how will Nina stumble across her? Perhaps she already has! There’s a good chance Willow Tait (Katelyn MacMullen) could be the mystery bio child.

GH fans grew suspicious after Nina and Willow faced off at the parent-teacher conference. Nina took a jab at Willow thinking she could properly assess the bullying situation. She didn’t think that was possible since Willow didn’t have kids of her own. It really set Willow off and we now know why since she’s Wiley Cooper-Jones’ birth mom.

However, there was likely a deeper reason for that exchange. It may have been a hint about Willow being Nina’s daughter. The setup is perfect for it. General Hospital brought the rivalry in play and now they’re adding fuel to the fire.

At Harrison Chase’s (Josh Swickard) self-defense class, Nina and Willow kicked their feud up a notch. It seems bound to spiral out of control – perhaps just in time for the big revelation.

On January 17, General Hospitals spoilers say Willow will call Nina and Lulu Falconeri (Emme Rylan) to her classroom. She’ll want to a chat with them as the main women in Charlotte Cassadine’s (Scarlett Fernandez) life.

It appears Valentin won’t be invited, which may be significant. There could be a couple of clues to come out of this parent-teacher conference. Willow may call Nina out as the problem.

If Charlotte starts bullying Aiden Webber (Jason David) again or shifts her attention to another kid, Willow may think she’s picking up this behavior from Nina. Ms. Tait has witnessed first-hand how forceful Nina can be.

This could also be an opportunity to spot the other half of that heart pendant necklace. It’d be interesting if Nina sparred with Willow and then saw it around her neck. Nina might develop some doubts about Sasha.

Since Valentin won’t be in the loop on any of this, Nina could dig around without his knowledge. Perhaps Nina could call Sasha back to Port Charles and secretly do another DNA test.

Whatever the case, major Nina and Willow drama’s coming up. We’ll give you updates as other GH news comes in. Stay tuned to the ABC soap and don’t forget to check CDL often for the latest General Hospital spoilers, updates and news.