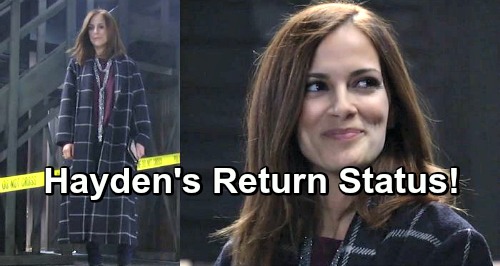 General Hospital (GH) spoilers reveal that there’s some disappointing news to report. After Dr. Hamilton Finn (Michael Easton) was contacted by Hayden Barnes (Rebecca Budig), many GH fans felt like a return might be imminent or at least in the works. We know Hayden didn’t lose the baby and that’s undoubtedly the unfinished business she brought up in her letter.

Finn isn’t in the loop on that, so GH will have to reveal the truth at some point. Unfortunately, it doesn’t look like it’ll be anytime soon. According to the new issue of Soap Opera Digest, Budig hasn’t been contacted about a potential comeback. That’s surprising since they let Finn receive this note and raised the possibility of Hayden popping up again.

However, maybe General Hospital just wanted to offer a reminder. It’s probably a good idea to keep Hayden fresh in viewers’ minds, even if they’re not bringing her back for a while. They can’t just let Finn’s kid roam around out there forever. You don’t set up a story like this without the intention of following through on it.

Of course, it might be a mistake to wait on the big reveal. Things are going quite well for Finn and Anna Devane (Finola Hughes) at the moment. A little too well actually! This relationship is quickly growing stale. Anna will have something to shake her life up in the coming weeks, but what about Finn?

Sadly, Finn doesn’t seem to be more than Anna’s sidekick these days. Isn’t it time for Finn to have some drama of his own? Plus, Finn’s missing out on crucial time with his little one. Hayden’s robbing him of their kid’s early years and that’s awfully cruel.

The longer this goes on, the harder it’ll be to repair the “Fayden” damage. That might be another mistake since Finn and Hayden seemed to work as a couple. When Budig was fired, it caused a real uproar on social media. She’s a solid actress and a popular General Hospital star, so fans are definitely missing her.

Hayden’s sloppy exit story left a bit to be desired, which means viewers are eager to see a better one. Are you disappointed that GH hasn’t gotten in touch with Rebecca Budig about a return? Do you hope that changes down the road? We’ll give updates as other details emerge. Stay tuned to the ABC soap and don’t forget to check CDL often for the latest General Hospital spoilers, updates and news.