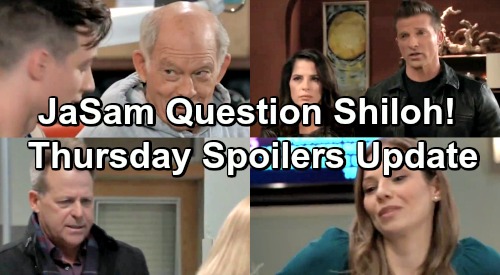 General Hospital (GH) spoilers update and promo for Thursday, January 3, tease that Lucy Coe (Lynn Herring) will reach out to Maxie West (Kirsten Storms). She’ll plead for help with some brilliant idea she has and Maxie will agree that it’s a good one. They’ll join forces on a new plan and hope their efforts pay off.

Meanwhile, Scott Baldwin (Kin Shriner) will give Monica Quartermaine (Leslie Charleson) some somber updates. He’ll reveal that Gail Baldwin (Susan Brown) has passed away, so they’ll both be deeply saddened. General Hospital will offer a little tribute to Gail and her portrayer in Thursday’s episode.

Scott’s stepmother was a crucial influence in his life. Monica loved Gail as well, so she’ll understand how difficult this is for Scott. They’ll support each other as they begin the process of letting go. Over with Kim Nero (Tamara Braun), she’ll continue to fume over Julian Jerome’s (William deVry) actions. He claimed he had sex with someone else after witnessing that “Krew” kiss and promptly broke up with her.

Kim has lingering feelings for Drew Cain (Billy Miller), but she truly fell for “Charlie,” too. She was blindsided by this breakup and she doesn’t like how Julian’s trying to play the martyr. Kim will let all her frustration pour out during a chat with Elizabeth Webber (Rebecca Herbst). She’ll hate that she let Julian in enough to break her heart, but Liz will offer a solid pep talk.

Other General Hospital spoilers say Drew will share something with Curtis Ashford (Donnell Turner). He might bring up that kiss with Kim and his recent meeting with “Hank” (Coby Ryan McLaughlin). Curtis is one of Drew’s best buds, so he’ll be happy to help him out. He can weigh in and provide some guidance if Drew needs it.

At Charlie’s Pub, Alexis Davis (Nancy Lee Grahn) will pop in for some serial killer talk. She’ll tell Julian what she’s heard about the murderer that’s on the loose. Julian will seem distracted, so Alexis may ask what’s bothering him. She’ll find out about Julian and Kim’s split soon, so that’s sure to throw her for a loop.

At the boxing gym, Mike Corbin (Max Gail) will enjoy meeting Chet Driscoll (Chris Van Etten). He’ll gloat about the lady he’s got waiting for him, so he’ll naturally be talking about Yvonne Godfrey (Janet Hubert). Unfortunately, GH viewers know Yvonne is married. The problem is Mike and Yvonne can never remember that.

Since their memory struggles are only going to get worse, Sonny Corinthos (Maurice Benard) has given up on trying to explain every time. It’s best to just change the subject and distract Mike with something else. Sonny will find an activity that he hopes will interest Mike on Thursday. It should at least give them an hour or two of happiness and that’s all Sonny can hope for.

Over with Marcus Godfrey (Nigel Gibbs), he’ll rip into Stella Henry (Vernee Watson) for overstepping. Marcus won’t think his marriage is Stella’s business or anyone else’s. He’ll want Stella to stop interfering, which could be tough for GH’s resident busybody.

Finally, Jason Morgan (Steve Burton) and Sam McCall (Kelly Monaco) will ponder Shiloh’s (Coby Ryan McLaughlin) secrets. Jason will point out that he already met him as “Hank,” but Shiloh will clear up any confusion. It seems he’ll claim that was a nickname Drew typically used. Regardless, Shiloh is the name he goes by now.

Jason will still have his doubts about Shiloh and his story. There are just too many questions swirling around this guy. Sam will also be nervous after interacting with Shiloh and hearing about DOD. She’ll worry about Kristina Corinthos-Davis (Lexi Ainsworth) getting too close to this crazy crowd!

General Hospital fans won’t want to miss the bombshells ahead. We’ll keep you posted as other GH news comes in. Stick with the ABC soap and don’t forget to check CDL often for the latest General Hospital spoilers, updates and news.