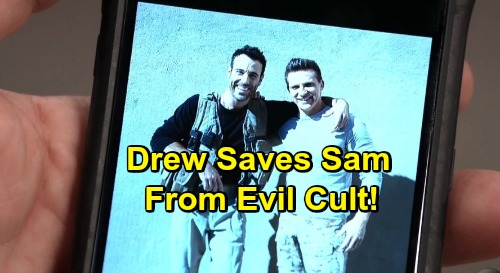 General Hospital (GH) spoilers tease that Drew Cain (Billy Miller) will get some startling news. He just met with “Hank,” a private contractor he supposedly used to hang out with in Afghanistan. “Hank” wanted to thank Drew for saving his life and even showed off a picture as proof of their friendship.

Of course, looks can be deceiving. Perhaps things didn’t end well between them. There’s always a chance that pic was doctored anyway. Regardless, “Hank” certainly didn’t tell Drew the whole story.

He neglected to mention that he also goes by “Shiloh” and he’s got some power at an apparent cult in Port Charles! It’s especially significant since Oscar Nero (Garren Stitt) has been living at this community house. Shiloh seems to have done his research, so he clearly knows Oscar is Drew’s son.

Jason Morgan (Steve Burton) will get as much info as he can out of Shiloh, but that won’t be a lot. Shiloh is choosing to be careful here. However, he’ll end up handing Jason a copy of the book they swear by.

Jason will have Every Day is a New Dawn in his possession, so he’ll undoubtedly let Sam and Drew take a look at it. They need to know what their loved ones are getting themselves into.

It shouldn’t take long for Jason, Sam and Drew to realize this is a cult. GH viewers realized it a long time ago, so they need to catch up! At some point, Drew should have another shocking realization. Sam’s threats are connected to this cult.

Kristina and Oscar are being reeled in. “Hank” has approached Drew with a story of the past. The puzzle pieces are right there waiting for Drew to assemble.

When Drew puts it all together, he’ll determine that he’s the reason for this brewing nightmare. Naturally, Drew won’t like that at all. His history will be the source of danger, so he’ll feel like he has to step up to protect everyone. This could be Drew’s chance for a big hero moment!

Will Drew take the lead in the end? Will he be the one to save Oscar and Kristina from the trouble they’re facing? General Hospital spoilers also point to an unexpected hurdle for Sam and Jason. If Drew saves Sam as well, they might feel a familiar spark.

There’s no guarantee “Dream” would reunite, but this could still pump the brakes on “JaSam” for a while – as if they needed another reason to go any slower! Whatever the case, Drew will be determined to help the people he cares about.

Will he have to get his memories back to make that happen? This is the perfect opportunity to force Drew into the procedure, so maybe GH will take advantage of it.