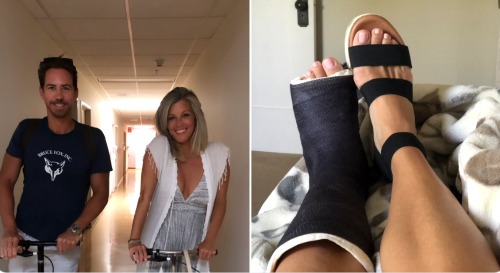 General Hospital (GH) spoilers reveal that one ABC soap star recently suffered an injury, which put her in a bit of a travel bind. Laura Wright (Carly Corinthos) was all set to catch a flight to Prague with her daughter, but life had other plans! Wright ended up with a broken foot and a plane ticket she was unable to use. She quickly reached to Delta on Twitter in hopes of getting her money back.

“OK @Delta I have to cancel my flight to Prague with my daughter because of my broken foot here’s hoping you guys help me out—— you guys are my favorite airline!! Don’t let me down,” Wright said. Thankfully, Delta was happy to get in touch with Wright about the issue and figure it out for her. It’s a good idea to keep high-profile customers happy, and Wright happens to have 184.2K Twitter followers.

That’s a lot of people who could either praise or turn against Delta because of this! The ball was in the airline’s court, and they delivered help just as Wright requested. Delta encouraged the GH star to direct message them her confirmation code so they could get started. A little later, Wright was good to go. She posted an update through a tweet of gratitude and showed Delta some love.

Wright exclaimed, “Yay!!!!!!! Thank You @Delta !!! Full refund!!!!!!! Love you guys !!!” It sounds like her favorite airline will remain her favorite, so now all that’s left to do is get that foot healed up. General Hospital stars have injuries from time to time, but the show must go on.

There’s no word yet on what Wright’s broken foot means for Carly, but they may not even have to write it in. As long as Wright’s foot is carefully concealed under the kitchen table or out of camera view the doctor’s office, it shouldn’t be a big deal for her character. Then again, Carly could always go on bedrest for a while as a pregnancy precaution and film her scenes in a more comfortable position.

Yep I fell down the stairs over a week ago and broke my foot…. can’t walk for 6 weeks😫 I get to wears this sexy black cast for 4 and @wes_ramsey is a saint!!!! Thank you baby for taking care of me !!!!!! pic.twitter.com/cdRXkMuHJF