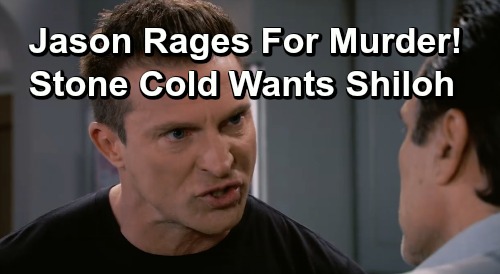 General Hospital (GH) spoilers preview promo for the week of June 10-14 reveal that some promises and threats are on the way. GH released a hot new promo, which was a super tease at a recent convention. It lets us know some action-packed episodes and great drama are coming up.

For starters, Jason Morgan (Steve Burton) will make a heartfelt vow to Sam McCall (Kelly Monaco). He’ll tell Sam that Shiloh Archer (Coby Ryan McLaughlin) will never touch her again. Jason will insist it’s going to make sure of it, so Sam will remind Jason of her love and let him know she feels safe with him.

The good news is Shiloh’s found a new focus and that takes the pressure off Sam. The bad news is Shiloh’s now concentrating on finding his child. He’ll do whatever it takes to find out his kid’s identity and get custody, which is exactly what Willow Tait (Katelyn MacMullen) is afraid of. She’ll remain equally determined to keep “Wiley Cooper-Jones” as far away from Shiloh as possible.

Meanwhile, Peter August (Wes Ramsey) and Maxie Jones’ (Kirsten Storms) relationship will bloom. General Hospital spoilers state that Peter will make an admission this week. During a romantic moment, he’ll confess that Maxie was the first person to teach him what love really is.

Maxie will suggest that love’s “kind of her thing” and sweetly point out that Peter’s getting the hang of it. These two got off to a rocky start, but things are definitely moving in the right direction now. However, Maxie’s plan to help Lulu Falconeri (Emme Rylan) and Dante Falconeri (Dominic Zamprogna) could cause some trouble down the road.

Other General Hospital spoilers say Jasper “Jax” Jacks (Ingo Rademacher) will clash with Nina Reeves (Michelle Stafford) and Ava Jerome (Maura West). Nina’s idea to use Ava as Crimson’s cover girl won’t go over very well. Jax will note that Nina wants her readers to have a clear picture of Ava, so he’ll wonder if that includes her body count.

It seems Jax may object to Nina framing Ava as an innocent victim, but Nina will fight for her idea. Ava certainly isn’t a saint, but Nina is right to consider what a compelling story this would be. Getting duped by a serial killer posing as his twin and having your daughter murdered by him should be enough to score sympathy.

As for Ryan Chamberlain (Jon Lindstrom), he’ll wake up in the prison infirmary at Pentonville. Valerie Spencer (Paulina Bugembe) will be there to explain the situation to Ryan. She’ll contend that Ryan’s going to spend the rest of his days there. Dr. Hamilton Finn (Michael Easton) will also be on hand, so he’ll undoubtedly face some kidney questions along with a fierce outburst.

Over with Carly Corinthos (Laura Wright), she’ll get some concerning updates about her pregnancy. Carly’s doctor will inform her that the latest test results may indicate a risk, so Carly’s worst fears will be confirmed. She’ll likely lean on Sonny Corinthos (Maurice Benard) for support, but he’ll have to juggle that problem with another one.

That brings us back to Shiloh. General Hospital spoilers say Jason will fume over Shiloh’s freedom, so he’ll meet with Sonny to discuss drastic action. GH’s preview video shows Jason shouting, “With Shiloh, I can kill him! And your right, I don’t want to wait! I don’t want to plan it! I just want to do it and get it done!”

Sonny will also meet with Brad Cooper (Parry Shen) and Julian (Jerome (William deVry) at some point this week. Julian will suggest that if Sonny’s going to eliminate Shiloh, he wants in. Protecting “Wiley” is all that matters to Julian, so he’ll want to help in any way he can – even if means a deadly outcome.