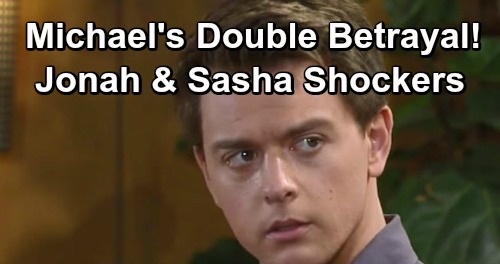 General Hospital (GH) spoilers tease that Michael Corinthos (Chad Duell) will face two big reveals in the coming months. They’ll be shockers that radically change the way he views certain characters, so Michael’s world will definitely be turned upside down. The question is: Which bombshell will Michael face first? Let’s consider the two shockers that are coming and when they might hit him hard.

GH fans know Nelle Benson (Chloe Lanier) gave birth to Michael’s son, Jonah Corinthos, before swapping him with a dead Wiley Cooper-Jones. Michael grieved the loss and slowly moved on with his life, but there’ll always be a hole in his heart – well, at least until the big reveal happens! Michael will eventually realize his godson is his actual son, but when?

There’s another major revelation that’ll shake things up for Michael at some point. Of course, we’re talking about Sasha Gilmore’s (Sofia Mattsson) secret scheme with Valentin Cassadine (James Patrick Stuart). She’s not really Nina Reeves’ (Michelle Stafford) daughter, so we’ve got an interesting connection between the “Wiley” drama and what’s going on with Sasha.

Both secrets involve lying to parents about the one thing that matters most to them in the world. It’s no coincidence that Michael’s involved here. Since Nina and Valentin’s wedding just got pushed back to September, that probably tells us the fake daughter shocker won’t come out until then. General Hospital spoilers say we’ll just have to enjoy the growing suspense.

It makes sense that the final “Wiley” shocker could come around November sweeps, but it’s possible it’ll happen before since the story’s really heating up. There could be a huge link in how these revelations come out. It’s easy to imagine Michael learning the truth about Jonah and then venting to Sasha. He’ll undoubtedly view Nelle and Brad Cooper (Parry Shen) as the scum of the earth for lying about this.

Michael may rage about how wrong it is to deceive someone about his or her own flesh and blood. Could the “Wiley” reveal guilt-trip Sasha into confessing – or at least put her on the verge of doing it? It’s common for soap secret-keepers to decide to come clean only to be beat to the punch at the last second. That makes viewers have a little more sympathy while the deceived characters have none at all.

Whatever the case, Michael will face a double betrayal blow. He’ll find out he’s missed over a year of his kid’s life and his love interest was willing to lie to her fake mom. General Hospital spoilers say Michael’s probably got a rough autumn ahead of him!

Are you excited to see these secrets come out? Do you think Michael will learn the truth about Wiley first or will the Sasha bomb be the first to drop? We’ll give you updates as other GH news comes in. Stay tuned to the ABC soap and don’t forget to check CDL often for the latest General Hospital spoilers, updates and news.