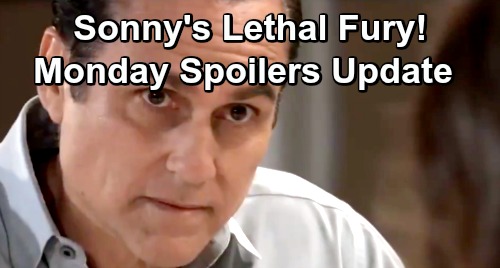 General Hospital (GH) spoilers update for Monday, June 10, tease that Julian Jerome (William deVry) will object to Carly Corinthos’ (Laura Wright) attitude. She’ll suggest Lucas Jones (Ryan Carnes) should keep his distance from his father, which Julian won’t understand. He’s been doing everything he can to support Lucas and protect “Wiley Cooper-Jones,” but he may feel it’s not being appreciated.

Lucas may admit that Julian’s been helpful, but Carly will think it’s wise to be wary when it comes to Julian. Trouble has followed Julian in the past, so Carly will just want Lucas to be careful. Meanwhile, Willow Tait (Katelyn MacMullen) will get a classroom visit from Diane Miller (Carolyn Hennesy). They’ll discuss the latest “Wiley” drama and try to figure out how to handle it.

Diane won’t approve when she realizes Willow inadvertently confirmed her child’s survival to her mom. Harmony Miller (Inga Cadranel) could hear the fear in Willow’s voice and determined only a mother would get that defensive. Willow will worry about what Shiloh will do, but Diane will insist he’s headed to prison and won’t connect the dots.

However, Willow won’t be so sure when Diane still has copies of the adoption records. She’ll contend that maybe those should disappear, which will catch her attorney off guard. Diane will wonder what Willow’s suggesting, but she should know the answer. The trouble is that could put Diane’s job in jeopardy, and she may not be willing to cross that line.

Fortunately, Willow’s a resourceful gal and could probably take care of this herself. If it comes down to it, Willow will absolutely break the law for “Wiley’s” sake. At GH, Shiloh will be on a mission to find his child’s birth certificate. He’ll ask another character how he might go about doing that, so it’s clear that he’ll be ready for answers.

In the hall, General Hospital spoilers say Jason Morgan (Steve Burton) will grill Harrison Chase (Josh Swickard) about Shiloh. They’ll both hope this is a slam-dunk case, but it turns out it won’t be. That’s because Shiloh is a master manipulator with serious control over his followers. He’ll get one of them to take the fall, so Shiloh will be a free man in no time.

Before Kristina Corinthos (Lexi Ainsworth) finds out, she’ll talk to Sonny Corinthos (Maurice Benard) about the loathed cult leader. Kristina will wonder if there’s enough proof to lock Shiloh up. The perfect outcome for her would be seeing Shiloh pay behind bars. The alternative is Shiloh going free and potentially facing murder at Sonny or Jason’s hands, which Kristina just isn’t cool with.

Kristina will beg Sonny to obey the law when it comes to Shiloh. No matter how this shakes out, Kristina won’t want to battle guilt for costing Shiloh his life. Still, we all know Sonny will unleash his fury one way or another!

Thanks to all the Ryan Chamberlain (Jon Lindstrom) chaos, Ava’s a pretty big name in the news. Featuring her could help Crimson sell plenty of magazines, so Nina will put any animosity aside and focus on her pitch. She’ll think Ava should have a chance to share her story, which could benefit both of them.