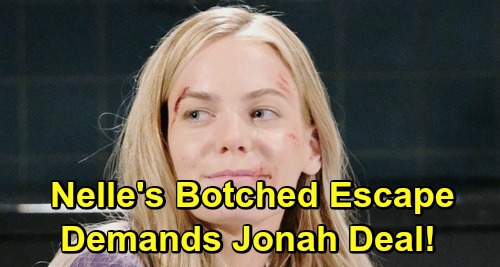 General Hospital (GH) spoilers tease that Nelle Benson (Chloe Lanier) is about to become Brad Cooper’s (Parry Shen) worst nightmare. She was his hero the fateful night Wiley Cooper-Jones died – at least she seemed to be. Brad was deeply distraught and couldn’t bear the thought of telling Lucas Jones (Ryan Carnes) he’d never have the opportunity to meet their son.

When Nelle came along and offered a perfectly healthy baby, it was an offer Brad just couldn’t refuse. Alas, Brad’s been miserable ever since and that trend will continue.

General Hospital spoilers say Nelle will cause serious drama when she makes her escape. Once she’s out on the loose in Port Charles, Brad will be a nervous wreck.

There’s always a chance that Nelle will kidnap “Wiley” while she’s free, but that’s only one concern. What if Nelle blabs to someone while she’s out? That may be something Brad starts to worry about.

After all, GH fans know Nelle is a master manipulator. Once she’s inevitably caught and taken back into police custody, what will Nelle’s next move be? She might realize it’s time to start bargaining.

Nelle might drop a hint about the information she could give Michael Corinthos (Chad Duell). She could summon him for a visit and explain that she knows something he’d like to hear. Nelle might try to tempt Michael into helping her out.

The Corinthos clan has connections, so General Hospital spoilers suggest that Nelle may think Michael could get her sentence reduced or at least help her avoid adding to her punishment with this escape.

However, it’s doubtful Michael would take the bait. Nelle could even take it a step further and claim Jonah is alive without divulging anything more. She might contend that she’ll only offer Jonah’s location if Michael cooperates. Nelle could just deny it later if she were questioned by the cops.

Michael might think Nelle’s just saying anything she can think of to avoid trouble. Nevertheless, Nelle’s clues could become crucial in time. She’s always been adamant that Michael should spend time with “Wiley” and take comfort in him. Nelle used her letters to taunt Michael, but they could eventually tip him off to the truth.