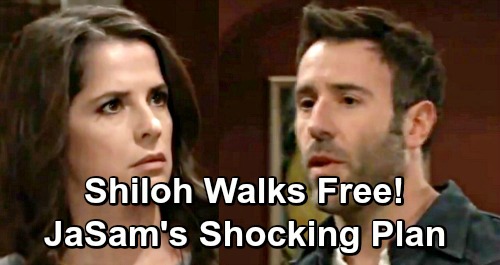 General Hospital (GH) spoilers tease that Shiloh Archer (Coby Ryan McLaughlin) will carry out a devious plan. GH fans know Shiloh lost his leverage when he was forced to give up the location of the pledges. However, he still has some things working in his favor. Shiloh obviously knows information about his followers that could hurt them, even if the consequences aren’t legal ones.

Shiloh may not have physical evidence, but that doesn’t mean he can’t run his mouth and cause trouble. That doesn’t mean every follower will remain loyal, but some of them will. Plus, we have to remember why these people handed over their pledges in the first place. They trust Shiloh and have bought all his hype.

If Kristina Corinthos-Davis (Lexi Ainsworth) hadn’t had a caring family to pull her out of Dawn of Day, she’d probably still be there supporting Shiloh’s philosophies. Since most of Shiloh’s followers are lost and alone, the pledges were just an insurance policy. Plenty of them will back Shiloh no matter what – even if it means taking the fall for his horrific crimes.

General Hospital spoilers say Shiloh will call on one of the faithful to go down for the charges against him. It’s not clear how Shiloh’s disciple will manage to sell that story, but he’ll find a way. As a result, Shiloh will get off the hook. He’ll be casually roaming around town when he bumps into Sam McCall (Kelly Monaco).

Naturally, Sam will fume when she sees Shiloh’s face. She’ll be shocked that he was able to beat the system once again. GH viewers can expect Sam to unleash her wrath, but Shiloh won’t pay much attention. He’ll think he’s proven he’s untouchable in Port Charles and on the planet for that matter. Shiloh seems to think he’s a gift to this world, but Sam certainly doesn’t agree!

General Hospital spoilers say Sam will furious and distraught over Shiloh’s freedom, but she won’t give up. She’ll refuse to believe Shiloh’s going to use this as a new beginning. Instead, Sam will consider it the beginning of the end. She’ll track Jason Morgan (Steve Burton) down soon in hopes of forming a new plan of attack.

It sounds like Sam’s fighting spirit is back and better than ever. We’ll give you updates as other GH news comes in. Stay tuned to the ABC soap and don’t forget to check CDL often for the latest General Hospital spoilers, updates and news.