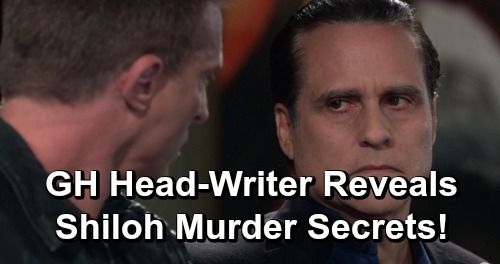 General Hospital (GH) spoilers tease that Shiloh Archer (Coby Ryan McLaughlin) will leave Sonny Corinthos (Maurice Benard) and Jason Morgan (Steve Burton) fuming. Harrison Chase (Josh Swickard) won’t be pleased either when he learns Shiloh has once again evaded justice. During the week of June 10-14, Shiloh will find himself a free man and that means an alternate takedown plan must form.

Chase loathes Shiloh, especially for everything he put Willow Tait (Katelyn MacMullen) through. He certainly wouldn’t mind if Shiloh was six feet under, but he won’t condone murder when he goes to Jason and Sonny. Chase knows that could very well be how they’ll choose to handle it, but he won’t want to support their criminal activities. Instead, Chase will offer a warning and hope that they listen.

General Hospital Co-Head Writer Shelly Altman discussed the mindsets of Jason, Sonny and Chase in a new interview with Soap Opera Digest. “Chase doesn’t want all of this ending in murder, as much as he, too, would like Shiloh out of the way,” Altman said. However, Jason and Sonny will have to get real about how they want to handle this once the detective’s gone.

“It’s personal now, for both Sonny and Jason,” Altman admitted. “Shiloh has affected both Kristina and Sam in really big ways. They are extremely frustrated and they bat around ways that they could eliminate the problem faster rather than slower.”

Kristina Corinthos-Davis (Lexi Ainsworth) will grow increasingly nervous as time goes on. She’ll be rattled when she realizes Shiloh won’t be locked up, which means he could be left vulnerable to her father. Kristina will know Sonny wouldn’t hesitate to pull the trigger – or order Jason to do it – but she won’t want Shiloh’s blood on her hands.

There’s also the matter of “Wiley Cooper-Jones” and the threat Shiloh poses to him. Michael Corinthos (Chad Duell) thinks that’s his godson, even though GH fans know it’s actually his own child. Jason may insist that the kid’s future is more important than Kristina’s feelings. They owe Willow Tait (Katelyn MacMullen) big time for helping out with Kristina, so the least they can do is save the baby she believes is hers.

General Hospital spoilers say there’ll be a lot to mull over as Sonny and Jason contemplate taking a final deadly step. They won’t do it now, but will they ultimately cause a grim fate for Shiloh? Will someone else do the deed instead? Whatever the case, Shiloh’s luck should inevitably run out sooner or later!

Are you anxious to see Jason and Sonny’s next big plan? We’ll give you updates as other GH news comes in. Stay tuned to the ABC soap and don’t forget to check CDL often for the latest General Hospital spoilers, updates and news.