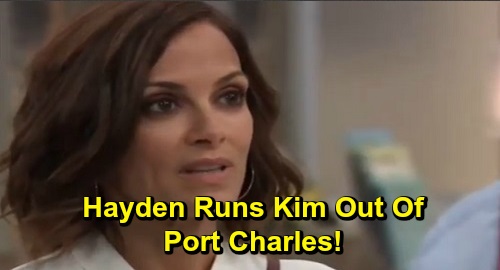 General Hospital (GH) spoilers reveal that smug Kim Nero (Tamara Braun) is in for a rude awakening. She claimed she wanted to make peace with Elizabeth Baldwin (Rebecca Herbst) and even suggested she still considered Liz a friend. Because everyone loves a good gal pal who steals your husband!

Liz thankfully set Kim straight about that. She made it crystal clear her feelings are far from friendly as far as Kim’s concerned. For someone who was trying to make amends in some way, Kim certainly doesn’t have much compassion for Liz’s situation. It’s borderline like Kim’s gloating at times.

However, Liz is right that no matter who Franco Baldwin (Roger Howarth) believes he is, they’re still married. Just like they were married when Kim slept with “Drew Cain” on the floor of her apartment. It was all too easy for her to surrender to temptation.

Kim has been through a lot, so we’ll cut her some slack when it comes to the devastating loss she’s faced. It was brutal for Kim to say goodbye to Oscar Nero Quartermaine (Garren Stitt). Even so, Kim should be seeking the proper treatment instead of deluding herself into believing this love story with “Drew” will pan out.

General Hospital spoilers say “Drew” will make a crucial choice on November 14. That same day, Kim will lean on Monica Quartermaine (Leslie Charleson) for support. They’re two of the few people who are rooting for “Drew” to keep his memories, so they may connect over that. It sounds like “Drew” will finally decide it’s time to have that procedure done, which should leave Kim heartbroken.

No matter the outcome of that procedure, Kim and “Drew’s” romance is doomed – and has been from the start. Franco is destined to get back to normal eventually, so Kim’s just creating more heartache for herself. Nevertheless, Hayden Barnes (Rebecca Herbst) may want to walk about her sister’s heartache when they cross paths.

On November 18, Kim will run into Hayden and spark a conversation. It could be a tense one considering Kim’s role in Liz’s suffering. Hayden may rush to Liz’s defense and urge Kim to leave town. She could easily unleash her wrath here.

Then again, Hayden could choose a gentler tactic and talk about her own fresh start away from Port Charles. Although Hayden regrets lying to Hamilton Finn (Michael Easton), there could be certain aspects of that fresh start she appreciated. Hayden could at least play up this angle in an effort to hurry Kim off.

GH spoilers haven’t confirmed Kim’s exit just yet, but strong buzz indicates that Braun finished filming a while back. It looks like this encounter with Hayden could be one of Braun’s last scenes, so Hayden could easily say something that gives Kim the final push to leave. Kim may truly let go of “Drew” and focus on a healthier path somewhere else – perhaps even out of the country.