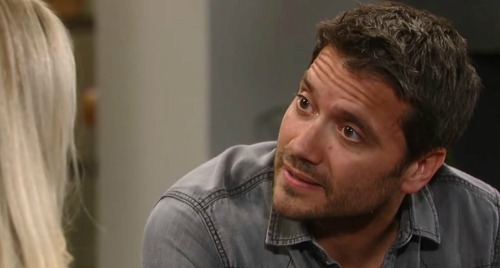 General Hospital (GH) spoilers has some news to pass on regarding Dominick Zamprogna’s status. Dominick, who portrayed Dante Falconeri on the ABC soap, left GH last year when his contract expired. Since then, fans have been clamoring for his return, and he did return for Maurice Benard’s special “Sonny-centric” anniversary episode in November 2018.

But fans would like to see Dante return to his wife Lulu Falconeri (Emme Rylan). Last we saw Dante, he left Port Charles to track down arms dealer Raj (Noshir Dalal), who once attempted to kill Lulu. Except for the special anniversary episode, he hasn’t been seen since.

However, we do know what Dominick Zamprogna has been up to since leaving GH. He’s appeared in Season 1 of Amazon’s “Tin Star,” and he’ll soon be seen in Season 2. And he has been busy producing and starring in a movie about the man who invented the infamous “Ponzi scheme” investment scam.

Whether Dominick will be back to GH remains to be seen, though ABC Soaps In Depth is reporting that he’s made it clear that he’s willing to appear on a recurring basis if he’s available. That’s hopefully good news for fans!

Soaps In Depth also talked to Emme Rylan, who portrays Lulu, about Dante’s possible return, and she indicated that she’d love to see Lulu face some challenges before that happens. She said: “There are so many things they can do right now. Lulu really misses him. I would like to see her fall apart.”

Emme continued: “She’s just had it together for too long. Let her fear that he’s not coming back – or that he’s dead! – and let her unravel for a little while before Dom [possibly] comes back.”

Do you think we’ll see Dante return to Lulu in 2019? Stay tuned to the ABC soap and don’t forget to check CDL often for the latest General Hospital spoilers, updates, and news.