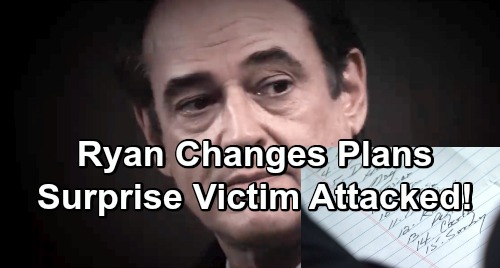 General Hospital (GH) spoilers tease that Ryan Chamberlain (Jon Lindstrom) will put some deadly schemes in motion. In Monday’s episode, Ryan got fed up with Carly Corinthos (Laura Wright). She just won’t let this whole “Wilson Ritter” thing go and that’s a problem for Ryan. He doesn’t need anyone digging around and finding out that “Wilson” is actually his twin, Dr. Kevin Collins (Jon Lindstrom).

Ryan enjoys killing and causing trouble anyway, so he put Carly on his murder list. However, the big shocker came by the name he put under hers. Ava Jerome (Maura West) couldn’t convince Sonny Corinthos (Maurice Benard) to let her have Avery Corinthos (Ava and Grace Scarola) for longer periods of time, which meant running away with Ryan was out. Now a double-murder plot is brewing!

General Hospital spoilers say Ryan will form a plan of attack. He’ll believe he can get Carly out of his hair and eliminate Sonny’s obstacle. With those two out of the picture, there’ll be nothing standing in the way of a future with Ava far away from Port Charles.

Of course, murdering people isn’t as easy as Ryan sometimes makes it look. That’s especially true when you’ve got a full security team like Sonny has. He’s even got people watching Lulu Falconeri’s (Emme Rylan) house. Sonny will continue to watch out for Lulu as best he can. He’ll hope to keep Carly and their other loved ones safe, too.

Nevertheless, Ryan’s got guts and will inevitably strike at some point. General Hospital spoilers say he’ll summon Carly for a meeting on Friday, but his attack may shift gears. Carly will end up heartbroken next week and Sonny will still be perfectly fine. It sounds like Ryan may not get to them just yet.

Ryan can be awfully persistent though and that could mean disaster for the Corinthos clan. GH fans can expect total chaos for this family in the coming months. Will a murder attempt be part of that chaos? What about two murder attempts? Could Ryan actually harm Carly, Sonny or both?

It’s doubtful Sonny or Carly will die, but Ryan just might make them suffer down the road! In the meantime, Lulu may be the one to keep an eye on. She’ll land in grave danger soon, so Ryan may be a more pressing threat to her safety. We’ll give you updates as other GH news comes in. Stick with the ABC soap and don’t forget to check CDL often for the latest General Hospital spoilers, updates and news.