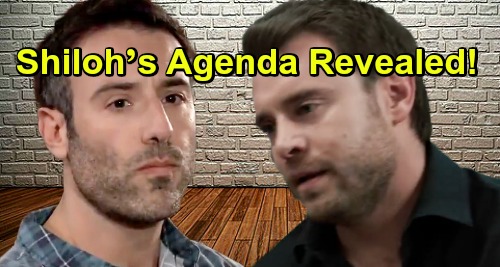 General Hospital (GH) spoilers tease that Sam McCall (Kelly Monaco) and Jason Morgan (Steve Burton) may have the wrong idea. After they mulled over Shiloh Archer’s (Coby Ryan McLaughlin) suspicious connections, Sam put herself at the center of his mess. She believes this is all about how she wronged Shiloh by conning his father and screwing him out of the family money.

Sam and Jason assume Shiloh’s connections tie in with his revenge mission, but it’s more complicated than that. Shiloh seems to have a genuine, separate link to Drew Cain (Billy Miller). If Shiloh just wanted to reel Sam in, using Kristina Corinthos-Davis (Lexi Ainsworth) would’ve been enough. In fact, Shiloh could’ve avoided a lot of suspicion by leaving Drew and Oscar Nero (Garren Stitt) out of it.

Instead, Shiloh’s created unnecessary red flags and we have to wonder why a smart guy like him would do that. Perhaps it’s because Shiloh is determined to mess with Drew, too. Drew may even be the actual target. By making Sam think this is all about her, Shiloh can distract her from his true agenda along with protective Jason.

Shiloh appears to have plenty of money through his motivational speaking gigs. He didn’t particularly like his father anyway, so his beef with Sam was strictly financial. Since Shiloh’s doing just fine now, it’d be kind of petty and dumb to risk everything like this. General Hospital spoilers state that there seems to be a much deeper reason for Shiloh’s anger.

If Drew really saved his life like Shiloh claims, wouldn’t this guy cut Sam some slack? Shiloh has done his research and knows Drew still cares a great deal about Sam. It makes sense for him to include Sam as part of his plan. The real question is: What did Drew do to Shiloh all those years ago? It certainly wasn’t rescue him if Shiloh’s acting this shady! That whole story is probably something Shiloh cooked up.

General Hospital spoilers say Jason and Sam will attend a DOD seminar soon. They’ll hope they can learn more about Shiloh and see what he’s up to. On January 17, Sam will face another Shiloh shocker. That same day, Jason will offer a stern warning to Drew. Will they finally get the picture and realize Drew’s the one in the most trouble?

Drew may have a dark side buried within his memories, so Shiloh could have a very good reason for turning against him. We’ll give you updates as other General Hospital news comes in. Stay tuned to ABC’s GH and don’t forget to check CDL often for the latest General Hospital spoilers, updates and news.