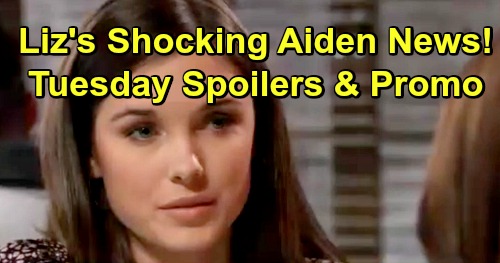 General Hospital (GH) spoilers for Tuesday, January 15, tease that Anna Devane (Finola Hughes) will await some potentially terrifying news. After her emergency surgery, she’ll wonder how bad the damage was to her eyes. Anna will have bandages covering them as she worries about what the future holds. Permanent blindness certainly isn’t something she ever expected or prepared for.

Nevertheless, Anna will have to face that possibility now. She’ll try to be strong as she hopes for the best, but she’ll also choose to be realistic. Anna won’t want to set herself up for heartbreak by considering only a positive outcome.

Of course, GH fans know Anna will get her sight back eventually. Whether the surgery worked or not, Dr. Hamilton Finn (Michael Easton) will get the job done somehow.

In the meantime, Harrison Chase (Josh Swickard) will let himself get dragged into a mess. Finn will confront his brother and try to figure out how it happened, but Chase will just focus on the task at hand. He always finds a way to deal with the drama and concentrate on his cases.

Over with Franco Baldwin (Roger Howarth), he’ll hang out with Aiden Webber (Jason David) in the kitchen. When Franco sees how much fun Aiden is having with their cookie prep, he’ll be puzzled. Franco will wonder why Aiden never mentioned that he liked baking before.

Aiden will probably suggest that he’s been teased about it at school – or perhaps he thought he would be if he came clean about enjoying it. Cameron Webber (William Lipton) already warned Aiden about taking his princess pencils to school. Aiden also wasn’t that into the typical boy toys at Christmas, so it seems he likes things that society views as girly.

That could tie in with Elizabeth Webber (Rebecca Herbst) and Willow Tait’s (Katelyn MacMullen) conversation on Tuesday’s new GH episode, January 15. Liz will ask Willow if there’s something about Aiden that makes him a target. Between Aiden’s sensitive side and toy choices, Willow may have a pretty good idea.

Other General Hospital spoilers say Josslyn Jacks (Eden McCoy) will hear about Cameron’s probation. She’ll be curious about the reason for it, so Cam will explain the whole weed situation. They’ll both be glad Cameron only faced minor consequences. Joss will also tell Cam that appreciates what he was trying to do for Oscar Nero (Garren Stitt). His efforts will really mean a lot to her.

At GH, Oscar will have questions about his condition. He’ll want to know it’s going to be like when he’s dying. How will Oscar feel as he gets closer to the end of his life?

Dr. Terry Randolph (Cassandra James) will be straightforward about that, but she’ll hope to give Oscar some comfort, too. Terry will provide an estimate of how much time Oscar has left and encourage him to make the most of it.

Monica Quartermaine (Leslie Charleson) will be concerned about Drew Cain (Billy Miller) as he deals with all this. She’ll worry that Drew’s going to crumble, but Dr. Kim Nero (Tamara Braun) will be the one on a downward spiral. Their family will definitely face some hard times over the next few months.