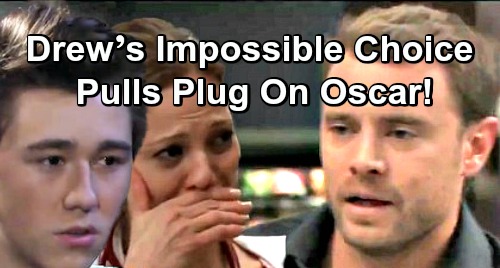 General Hospital (GH) spoilers tease that Drew Cain (Billy Miller) will face an impossible choice. Could this involve a decision regarding his son, Oscar Nero (Garren Stitt)? The next couple of weeks will bring major drama to several characters connected to Oscar. It could be building to Drew’s tough dilemma.

GH fans can expect Dr. Kim Nero (Tamara Braun) to summon Drew. It sounds like there could be an urgent crisis. Later, Sonny Corinthos (Maurice Benard) will face anxiety as he awaits some news. Carly Corinthos (Laura Wright) will battle a broken heart thanks to the drama that’s unfolding. Soon after, Sonny will pay his respects.

Death will eventually come for another Port Charles resident, but will it be a murder or the result of illness? It’s possible Oscar will bite the dust next. His condition could deteriorate rapidly, which might leave him on life support by the end of January.

That would explain the anxious waiting game for Sonny and heartbreak for Carly. They would hate watching Josslyn Jacks (Eden McCoy) suffer through this. On the GH episode airing January 11, Sonny spoke to Drew Cain (Billy Miller) and Kim at GH. He wanted them to know his resources would be at their disposal if they wanted to fly Oscar overseas for any other experimental treatments.

However, Kim has already researched all possibilities thoroughly. She came up empty, so she’s moving toward acceptance. Drew also knows that the battle has come to an end, so they’re just trying to make peace with that as a family. They were grateful to Sonny, but Oscar’s time is running out and there’s really nothing that can be done.

Still, watching Oscar fade is going to be difficult. General Hospital spoilers say Kim and Drew will get a realistic timeline of how long Oscar has left. The news will hit Kim hard, but Oscar and Josslyn will stay in pretty good spirits. They’ll use it as a guideline to fulfill Oscar’s bucket list, but Kim will only be able to think about the son she’s losing.

If Oscar experiences a rapid decline, Kim may not be able to let go so soon. She might end up in denial as Oscar’s brain dies before the rest of his body. Drew may have to make the call when it comes to pulling the plug on the terminal teen. Distraught Kim probably wouldn’t be of much help.