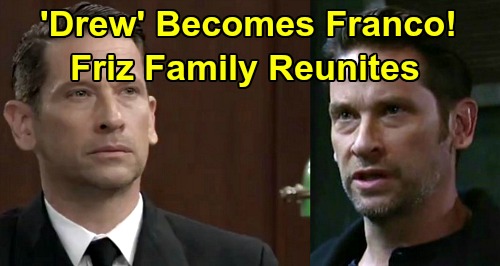 General Hospital (GH) spoilers tease that the outcome of Franco Baldwin’s (Roger Howarth) hearing will bring some strong emotions. Martin Gray (Michael E. Knight) did everything he could to argue that Franco is now “Drew Cain” and should stay that way. Scott Baldwin (Kin Shriner) also fought hard to return Franco to his family. That fight could have a profound impact on Franco in the coming episodes.

Before the hearing, “Drew” was unwilling to accept any arguments about Franco’s comeback. He was sorry about the toll this is taking on Elizabeth Baldwin (Rebecca Herbst) and her boys, but he wasn’t keen on giving up his memories. Franco promised he’d come back to Liz, but “Drew” didn’t feel obligated to keep that promise. Will Franco’s view change thanks to the heartfelt words Liz and Cameron Webber (William Lipton) said in court?

General Hospital spoilers suggest “Drew” will likely win the case, but he’ll have to do some soul-searching. He may start to accept that he truly is Franco. The actual Drew Cain (Billy Miller) was presumed dead in a plane crash, so “Drew” has to come to grips with who he really is – and that’s Franco Baldwin.

Kim Nero’s (Tamara Braun) drugged-Drew-baby-making confession will affect Franco as well. He’ll realize he’s feeding her delusions. Kim’s clinging to some fantasy of the past with her friend’s husband. None of this is right, so “Drew” could have a change of heart soon enough. He might determine that he has to let Kim go and return to Liz after all. “Drew” may sign up for this memory procedure on his own.

Liz is convinced Franco’s still in there, and that seems to be true. GH viewers can expect Franco to be torn once this hearing is over. Will he determine that a sacrifice must be made for the “Friz” family? Will “Drew” give up his memories in hopes of bringing back Franco?

That appears to be where this storyline is headed. Of course, it may take a detour since some danger’s brewing. Before Thanksgiving, “Drew” will indeed find himself on a perilous path. There’s a good chance “Drew’s” memories will intensify as a result of this procedure. Why else make it one of the possible outcomes? Peter August (Wes Ramsey) will certainly rev up his efforts to stop this threat.

However, love will prevail in the end. “Drew” may gradually remember Franco’s memories due to the procedure. Then again, it might just be through determination and the pull of the people Franco adores. They mean something to “Drew,” even if he only recognizes it on a subconscious level right now.

General Hospital spoilers hint that Franco will be back to his old self by Christmas. It sounds like we’ll see a happy holiday for Liz, Franco, Cameron, Jake Webber (Hudson West) and Aiden Webber (Jason David). After the nightmare they’ve faced, they deserve some peace and joy this year!

GH fans won’t want to miss what’s in store. We’ll give you updates as other news comes in. Stay tuned to the ABC soap and don’t forget to check CDL often for the latest General Hospital spoilers, updates and news.