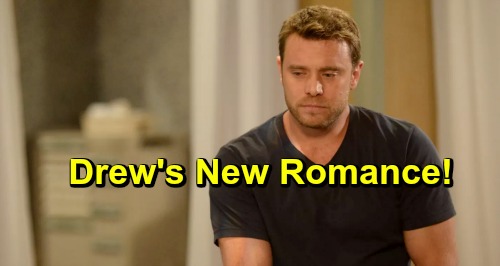 General Hospital (GH) spoilers say that Drew Cain (Billy Miller) has been with Liz Baldwin (Rebecca Herbst), and Sam McCall (Kelly Monaco) and neither relationship lasted. Sam and Drew have been apart for months now, and it’s time for Drew to move on with his life, especially after Oscar’s impending death. Who would be a good match for Drew? Port Charles has a few single ladies, which one would be good for Drew?

General Hospital’s Maxie Jones West (Kirsten Storms) is available, but she just turned down a date with Chet Driscoll (Chris Van Etten) because she is hung up on Peter August (Wes Ramsey). Maxie has never had a great track record when it comes to relationships, and frankly several of her lovers have ended up dead.

If Drew plans on sticking around, Maxie probably isn’t the safest bet. Maxie may not be a black widow, but she sure has terrible luck with men.

General Hospital’s Dante Falconeri (ex-Dominic Zamprogna) hasn’t been gone long enough for Lulu Falconeri (Emme Rylan) to move on yet. Later on, Lulu may be open to a new relationship, but anything at this point would be destined to fail, and Drew doesn’t need another failed relationship.

General Hospital’s Nurse Amy Driscoll (Risa Dorkin) doesn’t have a boyfriend as far as we know; we rarely see her at all. Amy might be a little young for Drew, but she has a bubbly personality and may manage to draw some emotion out of the man. Drew undoubtedly could use some cheering up because most of the time he looks ready to needs to take a nap. Maybe Amy could cure his insomnia.

General Hospital’s resident D.A. Margaux Dawson (Elizabeth Hendrickson) would have been an excellent match for Drew if the writers hadn’t pulled the blackmail card. Billy and Elizabeth Hendrickson have played opposite each other before, and the pairing was fantastic.

It is hard to understand why these writers would choose to mess up a pairing that was one of the best options Drew had. Fans of these two were hopeful that they would be able to show us their onscreen magic yet again but that writers chose to ruin it over a flash drive.

According to General Hospital’s Kim Nero (Tamara Braun) has led Drew to believe they were in love and had a great relationship, however, Drew has no recollection of this. Is it possible that after Oscar’s death, Drew will have the memory procedure done and realize that Kim is indeed the love of his life?

Could Oscar’s death bring his parents back together without Drew’s memory returning? Kim may be into Julian Jerome at the moment, but that is subject to change while watching her child’s life slip away.

General Hospital writers need to realize that Drew needs a change. Drew has become stale and boring over the past five years. Let’s breathe some new life into both Drew and his love life by giving him a love interest.