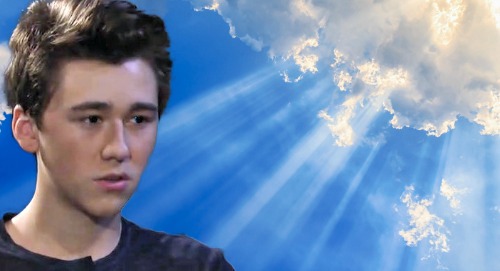 General Hospital (GH) spoilers tease that Oscar Nero’s (Garren Stitt) parents will await updates along with Josslyn Jacks (Eden McCoy). Joss, Drew Cain (Billy Miller) and Dr. Kim Nero (Tamara Braun) know the end is near for Oscar, but they’re hoping for just a little more time. Oscar’s latest episode was brutal enough to put him in a coma, but they need him to wake up for some proper goodbyes.

GH fans can expect some news regarding Oscar’s condition on April 11. Monica Quartermaine (Leslie Charleson) will seek out Drew to fill him in on Oscar’s status. There’s no word yet on what that status might be, but there should be some improvements. After all, the conclusion of this storyline would fall flat if we never really saw Oscar’s decline and his tough sendoff.

General Hospital spoilers say Oscar will almost certainly awaken, but he’ll remain in a grim state. He’ll undoubtedly have trouble speakiing and following conversations. Oscar may not even be able to walk after such a difficult ordeal. Dr. Terry Randolph (Cassandra James) has warned Oscar’s family about all of these things, but it’ll still be hard once they’re actually looking at a very different Oscar.

On April 17, Olivia Quartermaine (Lisa LoCicero) will prepare for a guest at the Quartermaine mansion. She may offer to take the lead on getting ready for Oscar, who will need palliative care and some special accommodations. Olivia always likes to be helpful, so she may argue that her part in this is the least she can do. She’ll just want Oscar to be comfortable in the final weeks of his life.

General Hospital spoilers say Josslyn will be a mess as Oscar fades fast. She may take comfort in Carly Corinthos’ (Laura Wright) upcoming revelation, which should involve the baby’s gender. However, the promise of new life may be painful, too. Josslyn hates that she’s losing Oscar, but she’s powerless to stop it. All she can do is tell Oscar she loves him and let him carry that love with him as he passes away.

GH viewers are going to need plenty of tissues for Oscar’s heartbreaking deathbed scenes. Drew, Kim and Joss should get some private moments to bid Oscar farewell, so don’t miss their parting words for him. We’ll keep you posted as other details emerge. Stay tuned to the ABC soap and don’t forget to check CDL often for the latest General Hospital spoilers, updates and news.