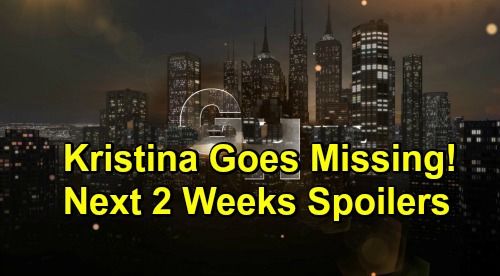 General Hospital (GH) spoilers for the next two weeks tease that the excitement will rev up in Port Charles. During the week of April 8-12, Alexis Davis (Nancy Lee Grahn) will fill Dr. Neil Byrne (Joe Flanigan) in on Kristina Corinthos-Davis’ (Lexi Ainsworth) cult crisis. She’ll be looking for any help he can offer, so Neil will deliver a warning. He may think Alexis indeed has a reason to be concerned.

After their conversation, Alexis will reach out to Sonny. She’ll tell him about Neil’s worries and potentially his advice on how to handle it. Later, Sonny will track Neil down and put him on the job. He’ll hire Neil to help him, but Jason Morgan (Steve Burton) will also work a more dangerous angle for Sonny. They’ll all be doing whatever they can to stop Shiloh before Kristina crosses a terrible line.

Meanwhile, Michael Corinthos (Chad Duell) will be pretty shaken up over something that happens. It looks like it’ll involve Kristina’s DoD initiation, which is coming up soon. Sam McCall (Kelly Monaco) will make a discovery in the attic, where Shiloh takes those he brings into “The Trust.” This is all building to some major Shiloh drama, so it’ll be interesting to how the biggest moments unfold.

Other General Hospital spoilers say Carly Corinthos (Laura Wright) will worry about Josslyn Jacks (Eden McCoy). Oscar Nero’s (Garren Stitt) death is getting closer, so Joss is already devastated over the thought of losing him. She’ll rely on her mom as they hope for as much time with Oscar as possible.

Over with Anna Devane (Finola Hughes), she’ll realize Alex Devane Marick (Finola Hughes) may not have given her the real story. Anna will jump to the worst-case scenario after discussing the matter with Robert Scorpio (Tristan Rogers) and Dr. Hamilton Finn (Michael Easton). General Hospital spoilers say Anna will fear Robin Scorpio-Drake (Kimberly McCullough) isn’t her daughter, so she’ll be a mess.

It’s Peter August (Wes Ramsey) that Anna is most likely wrong about, but it’ll take some work to reach this conclusion. In the meantime, Franco Baldwin (Roger Howarth) and Cameron Webber (William Lipton) will clash. During the week of April 15-19, Cam will manage to push Franco’s buttons and get his own pushed in return.

Next, GH fans will see a realization for Michael. He’ll put some clues together and express sympathy for someone, so this may involve the baby Willow Tait (Katelyn MacMullen) gave up for adoption. Elsewhere, a vengeful Ava Jerome (Maura West) will face rejection. She’ll reach out to Scott as her rage toward Ryan Chamberlain (Jon Lindstrom) grows, so he may insist her retribution plan is a terrible idea.

Across town, Molly Lansing-Davis (Haley Pullos) will fret about Kristina. She’ll think her sister may have gone missing, but there’s a chance Kristina will be with Jason instead. Kristina may even hide out for a while if she feels like this war’s getting out of control.

Whatever the case, Shiloh will ultimately corner Jason and demand answers. It seems he won’t know where Kristina is, so he may accuse Jason of forcing her away from her DoD family. Finally, Alexis will find out something she’s not happy about. She’ll realize Julian Jerome (William deVry) handed over the money for Kristina to enter “The Trust.”

Julian didn’t have all the details, but he’ll certainly get an earful anyway! We’ll give you updates as other GH news comes in. Stay tuned to the ABC soap and don’t forget to check CDL often for the latest General Hospital spoilers, updates and news.