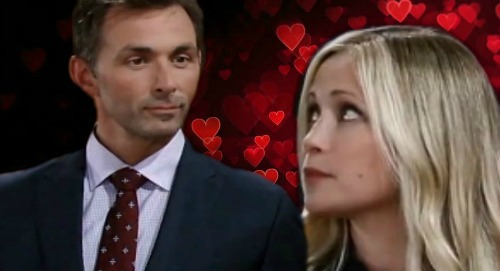 General Hospital (GH) spoilers tease that Valentin Cassadine (James Patrick Stuart) may need a new love interest soon. Lulu Falconeri (Emme Rylan) just lost Dante Falconeri (Dominic Zamprogna) and will need time to move on, but she’ll eventually need a love interest, too. Valentin and Lulu have never had an intimate relationship, but the heat shared in their scenes lead us to believe they could be an item.

Valentin and Lulu have a child together, and both of them love her very much. They sometimes run into trouble when Valentin backs up Nina Cassadine’s (Michelle Stafford) wrong parenting ideas, but Charlotte Cassadine (Scarlett Fernandez) is still a permanent bond between them. She could easily pull them together.

With Michelle Stafford’s exit from GH drawing near and no confirmed word on a recast, Nina could leave town when the truth about Valentin’s lie comes out. Valentin’s heart will be broken when he loses Nina again, which General Hospital fans know is bound to happen. He lied about Sasha Gilmore (Sofia Mattsson) being Nina’s biological daughter, so she’ll undoubtedly wash her hands of him.

Even if a recast enters the picture, Valentin may not be able to win the new Nina back. If this is really the end of the road for the pairing, Valentin will need to look elsewhere for love. Lulu is also battling heartache after Dante abruptly left town again and could connect with Valentin over their tough losses.

If Charlotte realizes Nina is no longer an option, she could be instrumental in bringing her parents together as a couple. Could Valentin and Lulu fall for this ploy? Charlotte’s behavioral issues could get even worse thanks to Valentin and Nina’s next breakup.

Willow Tait (Katelyn MacMullen) might reach out to Lulu for help and convince her that she’s genuinely concerned for Charlotte. It’d be smart for her to go though Lulu since Valentin now believes Willow’s targeting the kid. Valentin and Lulu might join forces to handle Charlotte’s crisis, which could lead to blooming love.

Since Ryan Chamberlain’s (Jon Lindstrom) hand was the only thing recovered, he could certainly return to Port Charles for revenge. Lulu survived Ryan’s attack, so he might want to finish her off. Although Sonny Corinthos (Maurice Benard) is providing protection for Lulu, Valentin may make an effort to do that, too. He knows how much Lulu means to Charlotte and wouldn’t want anything to happen to her.

Charlotte might feel better if her mom lived at Wyndemere for a while and could be kept safe from Ryan. Close quarters could lead to close parents. General Hospital spoilers suggest that if things head down this route, Valentin and Lulu might come together in true soap fashion and make a lasting couple.

After all, there’s a fine line between love and hate! We’ll give you updates as other GH news comes in. Stay tuned to the ABC soap and don’t forget to check CDL often for the latest General Hospital spoilers, updates and news.