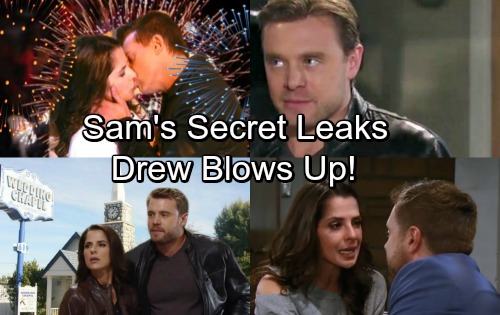 General Hospital (GH) spoilers tease that Drew (Billy Miller) and Sam (Kelly Monaco) will begin the next phase of their journey together. They’ve committed to each other and they’re ready to dive into a legal marriage. Sam may feel a sense of freedom after she’s said her vows. It might help her feel like she’s truly putting Jason (Steve Burton) behind her.

Unfortunately, Sam still has a secret and it’s about to blow up. GH spoilers say Sam will cause some trouble for herself during the week of January 29-February 2. Will she inadvertently reveal the truth about New Year’s Eve? Drew still doesn’t know about that kiss Jason and Sam shared. He’s bound to feel betrayed when he gets hit with that shocker.

Drew might accuse Sam of lying about her love for him. She admitted she had feelings for Jason, but she assured Drew he was the only man she wanted. Drew may argue that it definitely wasn’t true that night. He may feel like he’ll always have to look over his shoulder now. The trust between Sam and Drew will be shattered.

General Hospital spoilers say Drew will explode on February 2. Sam could easily be the target of his fierce wrath. Drew may rip into his wife for locking lips with Jason behind his back and covering it up. The kiss itself won’t even be what hurts the most. Drew will mainly hate the fact that Sam’s been deceiving him for weeks. He thought they had a solid relationship, but he won’t be so certain anymore.

Sam will undoubtedly explain that it just happened in the heat of the moment. She may contend that she needed that evening with Jason as closure. Sam could add that she married Drew, so she chose to be with him. She won’t think that kiss even matters.

GH fans can expect serious tension for this couple, but Drew might calm down and agree to let it go. However, Sam will be in hot water if anything else comes up. She’d better steer clear of Jason or an annulment could be in her future!

Are you excited to see what’s next in this love triangle? We’ll give you updates as other General Hospital news comes in. Stick with the ABC soap and don’t forget to check CDL often for the latest General Hospital spoilers, updates and news.