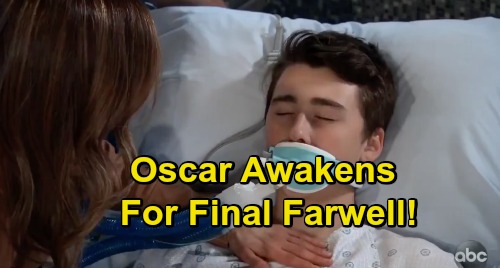 General Hospital (GH) spoilers tease that Oscar Nero (Garren Stitt) will remain in bad shape. He had his worst episode yet on the footbridge with Josslyn Jacks (Eden McCoy), so Joss is terrified he’ll never wake up. Oscar is now in a coma, but Dr. Terry Randolph (Cassandra James) can’t be certain of what happens next. She couldn’t guarantee that Oscar would wake up after an incident like this.

However, Terry warned that if Oscar does regain consciousness, he may not be the same boy he was before. That’s pretty much GH’s way of telling us that yes, Oscar will awaken. They’re also preparing us for Oscar to have trouble communicating and walking. He won’t be the cheerful teen who danced with Josslyn before his collapse.

Nevertheless, the fact that Oscar can wake up at all should be a win. Josslyn just wants the chance to tell Oscar she loves him one more time. Whether Oscar can say it back or not, Joss needs him to know how much she cares. She’ll hope to make Oscar feel what’s in her heart before he fades forever.

On April 11, General Hospital spoilers say Monica Quartermaine (Leslie Charleson) will give Drew Cain (Billy Miller) some news on Oscar’s condition. He’ll undoubtedly pass along anything important to Kim, but she may hear it from Terry as well. It looks like Oscar may be stable enough to move into the Quartermaine mansion for palliative care as planned.

Oscar didn’t want to die in a hospital hooked up to machines. He deserves the chance to pass away peacefully in Monica’s home. Oscar’s loved ones will surely surround him as we get closer to the end of his difficult battle. General Hospital spoilers say the show will deliver some powerful, emotional scenes.

The Oscar we’ve come to know is likely already gone, but a weaker, less aware version should be around to bid farewell to his friends and family. This is going to be devastating for every life Oscar has touched, but Kim, Drew and Joss will be hit the hardest.

Are you disappointed there’ll be no miracle cure for Oscar? Will you miss Oscar after his crushing departure? We’ll give you updates as other GH details emerge. Stay tuned to the ABC soap and don’t forget to check CDL often for the latest General Hospital spoilers, updates and news.