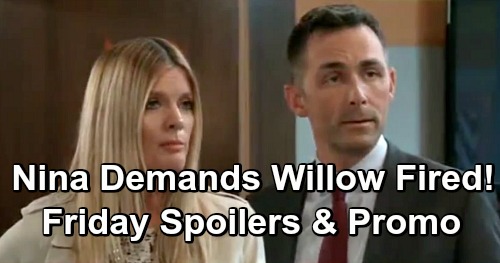 General Hospital (GH) spoilers for Friday, April 5, tease that Lulu Falconeri (Emme Rylan) will worry about Laura Webber (Genie Francis). Since Lulu admitted her home is no longer a place of solace, Laura suggested Lulu should leave Port Charles. If Lulu could get away from all the drama she’s faced recently, maybe she could find some healing.

However, Lulu won’t be sure she likes that idea. If she leaves, who’s going to take care of Laura? That’s what Lulu will wonder on Friday, but Laura will promise she’ll be fine. It’s possible Lulu will take a brief trip to clear her head, but it’s also possible she’ll just tough it out. Either way, Emme Rylan is on contract and will be sticking around as Lulu.

Other General Hospital spoilers say Lucy Coe (Lynn Herring) will meet up with Dr. Kevin Collins (Jon Lindstrom). She’ll suggest that she can give him a very warm welcome, so maybe she’ll offer a room at her place. Kevin has made it crystal clear that he still loves Laura, but that may not stop Lucy from thinking she can win him over.

Over with Peter August (Wes Ramsey) and Chet Driscoll (Chris Van Etten), they’ll discuss Maxie Jones (Kirsten Storms). GH spoilers reveal that Chet will want Peter’s opinion. He’ll ask if Peter thinks Maxie’s ready for anything besides friendship. It seems Chet didn’t get the memo that Peter’s interested in Maxie himself, so this could be a little awkward.

Next, Anna Devane (Finola Hughes) will get nosy. She’ll grill Maxie about the nature of her relationship with Peter, but Maxie may admit she’s not sure of anything at this point. It’s clear that Maxie’s struggling to navigate this phase of moving on, so patience will be required.

Willow really shouldn’t be too surprised since she insulted Nina in just about every way possible. She thought she had nothing left to lose since she planned to turn in her resignation. Now Willow will be facing this stepmom’s wrath instead. To make matters even more complicated, Nina is likely Willow’s real mother. This mess is only going to get messier in the weeks ahead!

Other General Hospital spoilers say Ava Jerome (Maura West) will be riled up. Jordan Ashford (Briana Nicole Henry) stopped by to reveal that Ryan Chamberlain (Jon Lindstrom) had been found, but she didn’t say the state they found him in. Is Ryan dead, alive or are they simply certain of the area he’s been in? Based on Ava’s comments this Friday, it seems Ryan could still be out there somewhere.

GH’s preview video shows Ava shouting, “Of course I want Ryan to be alive so I can kill him!” It sounds like Ava could have hope for that deadly move, but there’s also a chance she’s expressing disappointment that he’s gone. Regardless, Ava will tell Julian Jerome (William deVry) where she stands and remain furious over what Ryan took from her.

General Hospital could provide some “proof” of Ryan’s death just to lull PC residents into a false sense of security. It should be interesting to see what’s ahead in this hot storyline. We’ll give you updates as other GH news comes in. Stay tuned to the ABC soap and don’t forget to check CDL often for the latest General Hospital spoilers, updates and news.