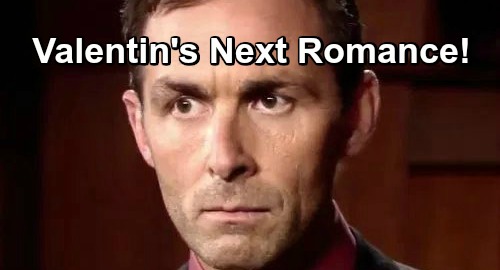 General Hospital (GH) spoilers tease that Valentine Cassadine’s (James Patrick Stuart) future with Nina Reeves (Michelle Stafford) looks awfully bleak. He finally won Nina back, but their reunion came about through a terrible lie. Valentin has convinced Nina that her daughter is Sasha Gilmore (Sofia Mattsson) when that’s not her daughter at all.

Of course, you could argue that Valentin’s actions aren’t so bad since he’s brought Nina great joy. However, he also can’t control this secret and that’s becoming quite apparent. Valentin survived that close call with Maxie Jones (Kirsten Storms) and Peter August (Wes Ramsey), but promptly faced another when Nina demanded answers about Liesl Obrecht’s (Kathleen Gati) leverage.

That resulted in more lies, so what’s become of this pairing? Valentin has always been a shady liar, but things should be different with Nina. If she couldn’t trust him before, she’s certainly not going to trust him after the truth comes out. Nina may find a real daughter in Willow Tait (Katelyn MacMullen), but that won’t erase the deception that’s been hanging over Valentine and Nina for months.

Stafford and Stuart loved working together, so it was reasonable to assume Nina and Valentin still stood a chance before the departure news. Now that we know Stafford’s exiting the role, we could be facing a completely different outcome. Nina might’ve come to understand there was love behind Valentin’s lies before, but that may not be the case anymore.

General Hospital spoilers suggest that a recast will most likely step in and finish the daughter storyline. Nina should learn Sasha’s a fraud and be reunited with Willow eventually. What happens after that? It probably depends on how good the recast is and how she’s received by fans.

Cady McClain’s name has been discussed as a possibility by a reliable GH insider. Whether McClain takes the role or someone else gets the job, it’s possible the Nina recast will exit following the daughter drama. If so, where does that leave Valentin? If Nina leaves town and walks out of his life forever, Valentin may have no choice but to move on.

General Hospital could cast a new love interest for Valentin or pair him up with someone on canvas. Ava Jerome (Maura West) might be an intriguing option. There’s bad blood between these two, but Valentin did help Ava get her face fixed. Plus, the bar has been significantly lowered since Ava’s last ex killed her daughter, Kiki Jerome (Hayley Erin). You can’t get any worse than Ryan Chamberlain (Jon Lindstrom)!

Then again, many fans have been longing for a Valentin and Anna Devane (Finola Hughes) pairing. Anna and Dr. Hamilton Finn’s (Michael Easton) romance is pretty humdrum, so that can’t last forever. General Hospital spoilers say Anna will be distraught after Peter is revealed as Alex Devane’s (Finola Hughes) son. That could drive her down a darker path and somehow lead her to Valentin’s arms.

GH viewers will probably accept even the oddest of pairings as long as the chemistry is there. Who would you like to see Valentin with down the road? We’ll give you updates as other GH details emerge. Stay tuned to the ABC soap and don’t forget to check CDL often for the latest General Hospital spoilers, updates and news.