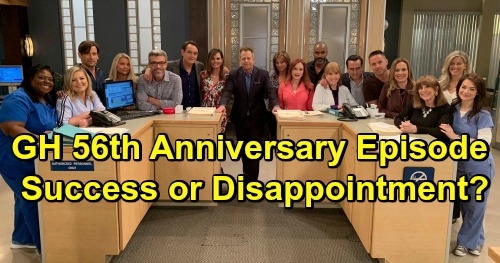 General Hospital (GH) spoilers reveal that many fans were left disappointed by the show’s celebration of 56 years on the air. After watching General Hospital for decades, most of us expected this anniversary episode to be more than what it was. Some of these characters didn’t belong in this episode and where were the ones who did?

GH’s Franco Baldwin (Roger Howarth) may be Lee Baldwin (Peter Hanson) and Gail Baldwin’s (Susan Brown) grandson through Scott Baldwin (Kin Shriner), but the kid who knew them was a mere mention. They really should’ve brought Serena Baldwin (Carly Schroeder) back and given Franco’s airtime to her. Instead, Franco got the credit for showing Scott how his parents felt about his actions years ago.

Then, there was Julian Jerome (William deVry). What does Julian have to do with the hospital at all? Julian himself mentioned he was there because Gail knew Alexis Davis (Nancy Lee Grahn) better than she knows herself, but there was just no need for it. Why do we have Alexis chasing him? The whitewashing did not work with everyone, and Julian certainly did not need to be in this episode.

Curtis Ashford (Donnell Turner) and Stella Henry’s (Vernee Watson) scene was one of the most misplaced conversations of the day. Why in the world would Jordan Ashford (Briana Nicole Henry) have to be treated at Mercy Hospital? The show is called General Hospital for a reason, so let’s not support Mercy.

Is there no dialysis treatment available at GH? We have an AIDS wing and a Pediatric wing. The doctors there perform brain surgery and heart transplants all the time. Are we really to believe they can’t give proper care to kidney patients? It made no sense for Jordan to find herself at Mercy for dialysis.

Lila Quartermaine (Anna Lee) and Edward Quartermaine (John Ingle) were highly involved in the hospital through fundraisers, donations, the Nurses Ball, Christmas events, etc. Why wouldn’t they be included in the anniversary show? The lack of these characters is another huge slap in the face of GH history.

There were other major missteps, too. Where were the Jessie Brewer (Emily McLaughlin) and Amy Vining (Shell Kepler) flashbacks? Sonny Corinthos (Maurice Benard) was standing at the nursery, but he didn’t have a single flashback of any of the kids he lost. GH might as well have thrown in scenes where Meghan Markle played a nurse briefly if they were going to show so many unnecessary characters!

Bottom line, the show’s 56th anniversary episode failed to deliver. General Hospital spoilers say there’s more drama ahead in Port Charles, but we missed some great opportunities to look back. Do you agree that this episode was a disappointment? We’ll give you updates as other news comes in. Stay tuned to the ABC soap and don’t forget to check CDL often for the latest General Hospital spoilers, updates and news.