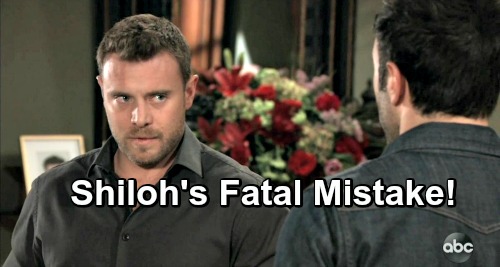 General Hospital (GH) spoilers tease that Drew Cain (Billy Miller) will continue to grieve. He only knew Oscar Nero (Garren Stitt) for a short time, but their bond meant the world to him. That’s why Shiloh Archer’s (Coby Ryan McLaughlin) recent visit was so infuriating. He pretended he was there to offer his condolences and hand over Oscar’s old DoD book, but there was clearly more to the story.

Shiloh’s sympathetic act wasn’t very convincing. He suggested that Oscar knew nothing about Drew’s past, but Drew was quick to point out that Oscar made peace with that. Shiloh wondered if Drew had made peace with that as well. It almost felt like Shiloh was taunting Drew with his lack of memories. That’s a rotten thing to do, especially under the tragic circumstances.

Of course, Shiloh may have wanted to assess the situation as well. His dark secrets are buried deep within Drew’s mind, so he can’t have those exposed. Shiloh doesn’t want Drew to get his memories back, so he might’ve been feeling it out. Too bad Shiloh may have gone about it in the wrong way! He was borderline goading Drew for a reaction, so this could be the start of a shocking memory arc.

Shiloh’s comments could certainly get Drew thinking about how much Oscar wanted to know his history. Drew can’t risk losing his memories of Oscar, Scout or anyone else in Port Charles he cares about, but maybe he can explore some alternative methods. There has to be a memory retrieval specialist out there who could help.

The danger Sam McCall’s (Kelly Monaco) facing could eventually weigh on Drew as well. GH hasn’t been letting their paths cross much, but that may change now that Oscar’s gone. Since Drew will be more involved in the fight against Shiloh, it’s reasonable to assume he’ll be interacting with Sam and Jason Morgan (Steve Burton) a bit more.

This could be the perfect opportunity for Jason and Drew to honor one of Oscar’s dying wishes. He wanted them to start acting like brothers, so teaming up would be a great way to do that. General Hospital spoilers reveal that Drew’s memory mission will come with some curveballs, but it could be exactly what “JaSam” needs to stop Shiloh.

As a bonus, Oscar’s death will matter. It won’t be completely senseless since it’s setting this in motion and sparking some heroic actions. By uncovering his own past, Drew can uncover Shiloh’s presumably murderous secrets and hopefully put an end to his reign of terror.