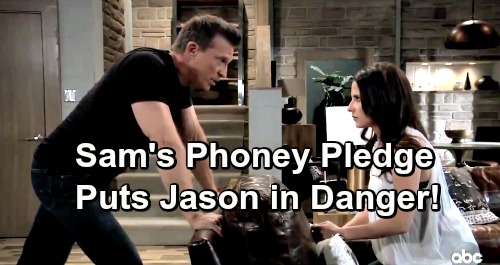 General Hospital (GH) spoilers tease that Jason Morgan’s (Steve Burton) plan could be a dangerous one. After Sam McCall (Kelly Monaco) admitted it was time for her trust offering, Jason had an idea of how to hook Shiloh Archer (Coby Ryan McLaughlin) and reel him in. Sam got on board, so her pledge involves the eyewitness murder of a man who never existed.

With a little help from Damian Spinelli (Bradford Anderson), everything will look completely legit. If Shiloh goes online to research this murder, he’ll read that this fake guy indeed died and see that the murder’s unsolved. He might even read that Jason was a person of interest if that’s what Spinelli chooses to put up. They can say whatever they want, and it can never be proven…or can it?

General Hospital spoilers say fans will see the full depth and reach of Shiloh’s power during May sweeps. It goes much further than you can imagine. Shiloh may have leverage on people who could take care of this for him. Jason suggested that Margaux Dawson (Elizabeth Hendrickson) would look incompetent if she tried to prosecute him, but that’s only true if there’s no real proof.

Shiloh just might be the kind of guy who could make that proof appear. Some fake records could seemingly bring this phony person into existence. Shiloh may know people in high places who could make that happen. Jason pointed out that Shiloh will find out Sam lied eventually, so he’ll have to have some form of a reaction. This could be one way for GH to take it.

Then again, Shiloh could take another approach and frame Jason for a different murder. He could even plot Jason’s murder if he’s angry enough! After all, people have died under mysterious circumstances after leaving Dawn of Day. Nothing ever came back on Shiloh, but it was implied that he simply coerced his followers into doing his dirty work.

Regardless, this pledge plan could be a disaster waiting to happen. Jason and Sam seem just a bit too sure this will work. General Hospital spoilers reveal that peril is brewing, so they could land in real trouble after Shiloh finds out the trust offering is bogus. “JaSam” may face this cult leader’s full wrath in some serious ways.

It sounds like the excitement’s revving up in Port Charles. We’ll give you updates as other GH news comes in. Stay tuned to the ABC soap and don’t forget to check CDL often for the latest General Hospital spoilers, updates and news.