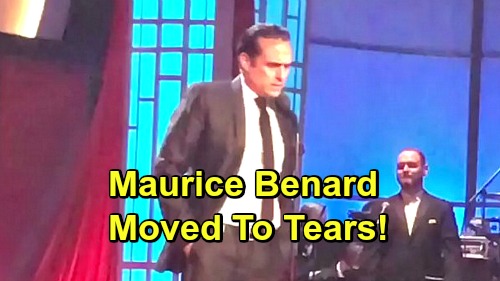 General Hospital (GH) spoilers is delighted to report that Maurice Benard won best actor at the 2019 Daytime Emmy Awards for his inimitable portrayal of Sonny Corinthos! No one could have been more surprised at the 46th annual Daytime Emmy Awards than General Hospital’s Maurice Benard himself. As Maurice took the stage, the humble fan-favorite couldn’t initially speak because he was moved to tears by the win.

During his unrehearsed acceptance speech, Maurice talked about the Alzheimer’s storyline regarding his onscreen father, Mike Corbin (Max Gail), who deservedly took home the award for best supporting actor.

Maurice says he never had to look hard to connect with the material because he thought of his own parents and how it would feel to be going through this with them. Having his parents still alive makes it easier to put himself in his character’s place and makes his portrayal so much more genuine in this story.

Max Gail Is A Bonus

Sometimes it’s hard for an actor to step into a role and fill it with the perfection that Max has done with the role of Sonny’s father, Mike. Max is a dedicated actor who strives for perfection in his role, and he does not disappoint. The onscreen chemistry between this father and son duo pulls fans in and makes this believable as a real family issue.

Max and Maurice have this father and son thing down, and it works out well. Max has done a great job stepping into Ron Hale’s (ex-Mike Corbin) shoes as the mobster’s father and unknown protector.

Maurice certainly is the modest type and refuses to take credit for this win himself. Maurice also thanks coworkers and friends Steve Burton (Jason Morgan) and Laura Wright (Carly Corinthos) as well as Max. It takes a joint effort to make this a believable story and this collection of actors pull it off with perfection.

The amount of love and work that these actors display to put this storyline together almost makes fan dread the day when it comes to a halt probably ending in Mike’s death.

The Competition Was Stiff

Maurice could not accept his award without mentioning his fellow actors who were nominated as well by calling them out by name and commenting on their performances this past year. Maurice was sure that someone else was going to win and literally had no speech prepared.

Maurice referred to castmate Jon Lindstrom (Ryan Chamberlain/Kevin Collins) as the man. Jon was the predicted winner of this award for his dual role of the nemesis brothers.

Maurice’s advice to future nominees, “always have a speech prepared” – this is great advice for those future actors who don’t believe they will win, sometimes it’s all in the luck of the draw. Come back to CDL for all of the top General Hospital news reporting and spoilers!