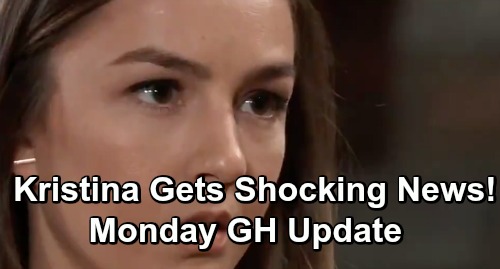 General Hospital (GH) spoilers for Monday, May 6, tease that Peter August (Wes Ramsey) will feel like his past his holding him back. He’ll worry he’ll always carry the weight of his evil father, Cesar Faison (Anders Hove), around with him. Peter just won’t be sure he’s capable of giving Maxie Jones (Kirsten Storms) all the love she deserves.

When Peter admits all this to Anna Devane (Finola Hughes), she’ll think that’s nonsense. Anna will praise Peter’s positive qualities and argue that he’s far from the man Faison was. She’ll give him a confidence booster, so Peter will agree to make an effort with Maxie. He’ll let himself love her, which means a surprise date in Paris is coming up.

Of course, Maxie won’t be privy to Peter’s conversation across town. She’ll be busy opening up to Lulu Falconeri (Emme Rylan) about her side of the drama. Maxie will sense that Peter’s pulling away, but she’ll desperately want to cling to their closeness. Fortunately, General Hospital spoilers say these two will manage to get on the same page and move forward soon enough.

In the meantime, Willow Tait (Katelyn MacMullen) will stun Kristina Corinthos-Davis (Lexi Ainsworth) with her Dawn of Day story. She’ll recall how she trusted Shiloh Archer (Coby Ryan McLaughlin) and thought he was so wise. Now Willow sees how wrong she was, and she’ll want Kristina to see, too. After Willow describes her escape from the cult, she’ll push Kristina to make her own clean break.

Other General Hospital spoilers say Robert Scorpio (Tristan Rogers) will spot Laura Webber (Genie Francis) at Kelly’s. They’ll take the opportunity to catch up and discuss possibly meeting once again. Robert will invite Laura to attend the Nurses Ball with him, which will earn him a smile. Whether Laura agrees or not, she’ll obviously be touched by the gesture.

Over with Dr. Hamilton Finn (Michael Easton), he’ll head to Jordan Ashford’s (Briana Nicole Henry) room at GH. Finn will deliver Jordan’s lab test results, which may show her condition is dire. Jordan remaining kidney is fading fast, so she’ll need a new one before it’s too late.

Naturally, Curtis Ashford (Donnell Turner) will support Jordan and try to stay positive. He won’t know what he’d do without his wife, so this has to happen for her. At some point on Monday, General Hospital spoilers say Curtis will mention his Ryan Chamberlain (Jon Lindstrom) mission. He’ll discuss any new clues and how he’s piecing them together, but he won’t have all the info he needs just yet.

At the Metro Court, Lucy Coe (Lynn Herring) will fume when she sees Ava Jerome (Maura West) with Dr. Kevin Collins (Jon Lindstrom). As Lucy deals with her rage, she’ll gripe to Scott Baldwin (Kin Shriner) before strutting over. Ava will assure Kevin that any attention is good attention if it lures Ryan out of hiding, but Kevin won’t be so sure when he spies Lucy. He’ll know a storm’s brewing!

General Hospital spoilers say Lucy will ultimately make a suggestion. She’ll think it’d be nice if Scott and Ava attended the Nurses Ball together. That’s when Kevin will admit he’s already taking Ava, so Lucy certainly won’t be happy about that.

It looks like some fun tension’s on the way, so stay tuned. We’ll give you updates as other GH news comes in. Stick with the ABC soap and don’t forget to check CDL often for the latest General Hospital spoilers, updates and news.