General Hospital Spoilers: Have You Warmed Up to Willow – Does Character Have Staying Power in Port Charles? 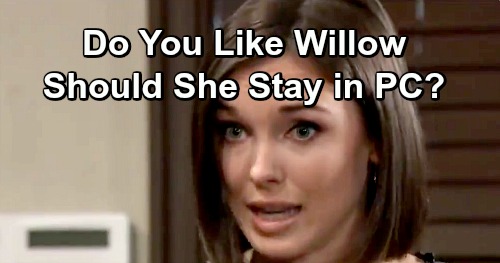 General Hospital (GH) spoilers tease that Willow Tait (Katelyn MacMullen) will continue to play a huge role in the Dawn of Day story along with the baby swap plot. She’s mixed up in several tricky situations, but there’s much more drama to come. Now that Willow’s settled in and become a focal point, we want to know what you think. Have you warmed up to Willow? Does this character have staying power?

In the beginning, Willow seemed awfully bland. She was dealing with pain that hadn’t been revealed yet, so her cold demeanor came off as rude and even a bit snobbish. There was just no heart to the character, so some GH viewers were quick to dismiss her.

It was tough to find a real spark between Willow and either of her potential love interests either. There just wasn’t any fire happening with Harrison Chase (Josh Swickard) or Michael Corinthos (Chad Duell) for that matter. However, things shifted somewhere along the way. General Hospital began to reveal more about Willow. They let her guard down and her personality adjusted accordingly.

One pivotal moment seemed to be when Shiloh Archer (Coby Ryan McLaughlin) finally caught up with Willow aka Kali Miller. Seeing Willow torn between fear and outrage brought some spice to the character. After Willow came clean to Chase, it showed some vulnerability we hadn’t seen before. The more we learned about Willow, the more sympathy we had.

That’s made a lot of us want to get to know Willow. Of course, Willow’s romance with Chase finally picked up as well. Their love scene was surprisingly sizzling and “Chillow” has that cute factor going on, too. At a time when GH doesn’t have a ton of great couples to root for, it’s nice to have Willow and Chase. They may not be meant to last, but they’re a sweet match for now at least.

It’s also been fun to see Willow put Nina Reeves (Michelle Stafford) in her place. Willow was absolutely right about Nina fueling Charlotte Cassadine’s (Scarlett Fernandez) bratty tendencies. General Hospital is finally showing some interesting layers to Willow, and many GH fans are on board with where this is going.

It seems likely that Willow is Nina’s real daughter, so that gives her a better shot at sticking around after all the Dawn of Day drama wraps up. General Hospital spoilers say there’ll be plenty of material to explore between Nina and Willow. They can figure out what their complicated relationship’s going to look like. That’s starting to feel like a good thing since Willow’s finding her groove as a solid character.

Has Willow won you over? Would you consider the character at success at this point? Do you hope she has a long-term future in Port Charles? We’ll give you updates as other GH news comes in. Stay tuned to the ABC soap and don’t forget to check CDL often for the latest General Hospital spoilers, updates and news.