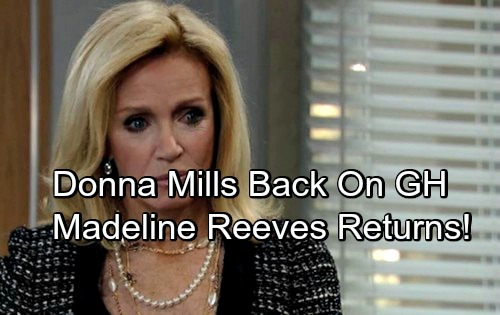 General Hospital (GH) spoilers tease that a familiar face is headed back to Port Charles. According to EW, Donna Mills is set to reprise her role as Madeline Reeves this August. She was last seen after her character was carted off to the slammer for the murder of Silas Clay (Michael Easton).

That was in September 2015, so it’s definitely time for Madeline’s comeback. It should be interesting to see the reason for this return. You can bet Nina (Michelle Stafford) will be involved somehow. Madeline is her mom, so Nina may visit her in prison and ask some important questions. Perhaps there’ll be some mystery from her past that only Madeline can solve.

Of course, Madeline was Nathan’s (Ryan Paevey) legal mother as well. He was raised as Nina’s brother, so they may touch on his passing. We should also note that Liesl (Kathleen Gati) managed to make her getaway. She could be on the run for a while, so Madeline and Nina should address that, too. Madeline may not be able to offer any info on Liesl’s whereabouts, but she could at least get updates.

Then again, there’s a chance that Madeline will make a soapy prison escape. General Hospital may give her the chance to break out and pass along some surprising tidbit to Nina or Liesl. There are plenty of ways for Madeline to stir up trouble and become a crucial part of the story.

Whatever the case, it should be fun to see Madeline. Her return will be brief, but it could still pack a punch. Donna Mills is a legendary performer with an impressive resume, so GH fans are lucky that she’s willing to pop in.

Plus, many viewers are still thrilled over the news about Genie Francis. She’s returning as Laura in September, so we’ve got a lot to look forward to! General Hospital spoilers say some exciting drama’s coming up over the next few months. Don’t miss all the twists and turns ahead in PC.

Are you glad Madeline will appear for a quick visit? What do you think she’ll be up to this time? We’ll keep you posted as other GH details emerge. Stay tuned to the ABC soap and don’t forget to check CDL often for the latest General Hospital spoilers, updates and news.