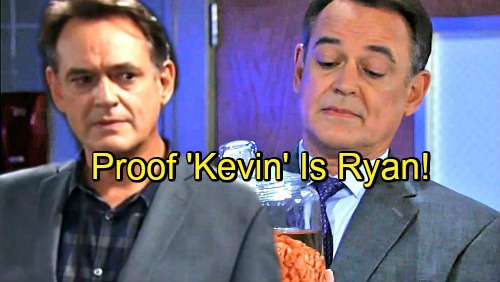 General Hospital (GH) spoilers tease that Ferncliff’s mystery patient may be the real Kevin Collins (Jon Lindstrom). There’s a good chance Kevin’s twin, Ryan Chamberlain (Jon Lindstrom), has been masquerading as his brother for quite some time. Naturally, this swap could bring some shockers, especially when Laura (Genie Francis) returns this autumn!

Ryan was presumed dead many years ago, but Dr. Kurt Lasaris (Casey Biggs) may have resurrected him somehow. He could’ve helped Ryan turn the tables and take over Kevin’s life. GH has already offered evidence that points in that direction. For starters, this mysterious patient’s been using Morse Code to communicate with Carly Corinthos (Laura Wright). That’s important because of Kevin’s background.

In early 2016, Helena Cassadine (Constance Towers) left Laura Collins (then Laura Spencer, played by Genie Francis) something intriguing in her will. She provided “the key to all Laura had loved and lost.” This key put Laura on a mission to find out what it might open. She eventually found an old trunk, which she was able to unlock.

Laura pulled an interesting textbook out of that trunk. It belonged to her first husband, Scott Baldwin (Kin Shriner), and it had a series of letters circled throughout it. Scott couldn’t explain the significance of the letters or why this book ended up in Helena’s hands.

After an online cryptographer search and some surprising twists, Laura was able to get help from “Dr. K” – aka Dr. Kevin Collins. He revealed that cryptography was a hobby of his. Kevin knows all about cracking codes, so Morse Code is right in his wheelhouse. It makes sense that he’d be knocking messages through to Carly.

When the mystery man’s screams were first heard, many General Hospital viewers thought he sounded like Kevin. GH fans have also picked up on Kevin’s strange demeanour. He hasn’t seemed like himself for several months now. That’s another huge clue about the apparent switch.

Of course, Carly recently passed the mystery patient in the hallway. He whispered “SOS” as we caught a blurry glimpse of him. General Hospital was careful not to confirm this guy’s identity, but he certainly resembled Kevin. He had the same build and facial structure, so the connection’s pretty obvious.

Based on all the available info, there’s enough proof to assume the real Kevin is locked up. General Hospital spoilers say the big reveal will bring some stunning reactions, so don’t miss the bombshells ahead.