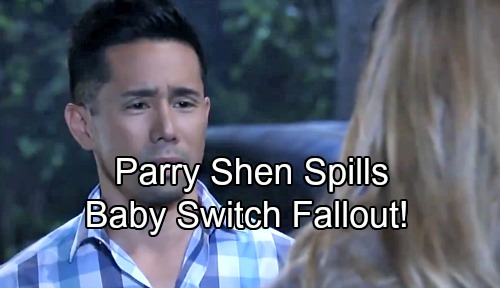 General Hospital (GH) spoilers tease that Brad (Parry Shen) and Lucas (Ryan Carnes) have some serious drama in their future. Nelle (Chloe Lanier) convinced Brad to take her baby and pass it off as Wiley, so that’s sure to bring some great twists and turns. In a recent Twitter chat, Parry Shen opened up about filming his heartbreaking scenes. He also dropped some fantastic hints about what’s ahead.

For starters, people wanted to know about the kiddos. One fan asked who was playing the real Wiley, but Shen admitted he wasn’t sure. It was baby central on GH, so he quickly lost track. Shen exclaimed, “Who knows?! At one point we had 6 babies on set!” It’s easy to see why Shen would get confused in a sea of infants.

Another viewer asked how hard it was to get through such emotional scenes. When Brad realized Wiley wasn’t breathing, it was truly devastating. Shen noted that it was pretty rough to play. In fact, it was even difficult to read about Wiley’s death. “I got this script right before I was supposed to shoot the episode meeting him,” Shen said. “I wanted to ‘unread’ that script before filming!!”

Of course, Shen also addressed Brad and Nelle’s (Chloe Lanier) friendship. They were thrown together quickly, but Shen felt it made sense. Brad could relate to Nelle since he’s been judged over his past. He saw some good in her, but will he change his tune once the truth about Nelle comes out? Shen thinks Brad’s “probably going to be angrier than anyone else.”

However, Shen admitted he’s had a blast working with Chloe Lanier. Whether you love this schemer or hate her guts, Lanier’s really rocking it as crazy Nelle. Shen gushed, “She gets so much heat for Playing Nelle but that just shows how good she is!”

Shen revealed that he just shot some new scenes with Chad Duell (Michael), so it’s possible the bomb will drop quickly. We at least know Brad will face some nervous interactions with the duped “baby daddy.” As for Lucas and Brad’s relationship, Shen foresees trouble. He teased, “I think this will definitely change things — how can it not?”

Nevertheless, Shen’s hoping they can work it out in the end. He’s counting on General Hospital to repair the damage and make “Brucas” stronger than ever. No matter what happens, Shen’s loving the excitement of this storyline. He suggested that “it’s way more interesting and challenging” when he’s got gripping material.