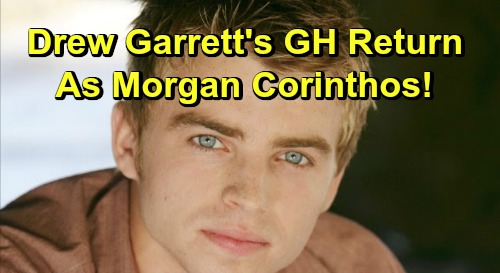 General Hospital spoilers report that fans have hoped for some time that Morgan Corinthos (formerly Bryan Craig) would eventually return from the dead. With Bryan Craig busy with other projects, could the former Michael Corinthos (Chad Duell) portrayer, Drew Garret,  take over the role of Morgan to bring Sonny Corinthos (Maurice Benard) and Carly Corinthos’ (Laura Wright) son home to his family? Drew is 2 years Bryan Craig’s senior and bears a nice resemblance (see pics in tweet below) to Chad Duell that would help make the brothers believable.

When General Hospital’s Michael woke up from his coma, he was very messed up. Michael was angry for no reason, he was moody, broody and looking for a fight. Drew undoubtedly had no trouble bringing out these emotions either. Morgan was bipolar, and that isn’t a far stretch from the brain-damaged teen Michael woke up as all those years ago.

Drew would be amazing in Morgan’s return scenes, reconnecting with his family, trying to get his bipolar disorder under control after years away from Port Charles. Dealing with the learning of Kiki Jerome’s (ex Haley Erin) death in his absence.

Drew Has A Connection With The Other Actors 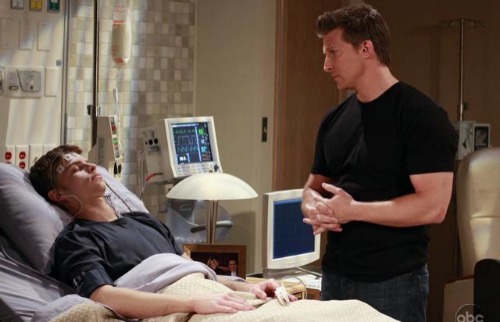 General Hospital’s Jason Morgan (Steve Burton), as well as Sonny and Carly, shared several meaningful scenes with Drew when he played Michael. Drew’s connection to these actors could only strengthen his reaction to them as Morgan. The emotional connection isn’t hard to have we you have played opposite these actors in another role.

The only involved actor that Drew hasn’t played opposite is Chad who is the current Michael. Drew has a history with the show and knows Morgan’s history from his time at GH before; he could slip into the role of Morgan and be amazing in it if he were allowed to do it. Drew joining the cast as Morgan would bring a fan favorite back to the show as well.

Drew is currently in contact with General Hospital fans on Twitter and recently shared scenes of himself and Lexi Ainsworth (Kristina Corinthos-Davis) from his time as Michael. Drew seems to be willing to come back to the show if asked and GH could use some younger adult male actors as there aren’t that many on screen now.

The fact that Drew keeps in touch with his fans could only be a plus for GH because it would bring fans back to the show that may have left. Drew could also pull new fans in that aren’t familiar with his work as well.

Drew is closer in age to Morgan than some suggested actors and would be a great addition to the Corinthos family. GH executives could consider asking Drew to step in if they decide to bring Morgan back from the dead. Come back to CDL for all your General Hospital spoilers, news and updates!

Back when I was on the run in Mexico https://t.co/8Qn2jPNluv