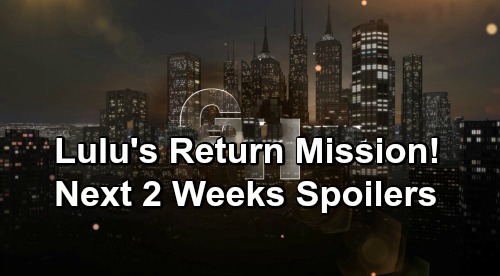 General Hospital (GH) spoilers for the next two weeks tease that the drama will heat up in Port Charles. During the week of April 22-26, Jason Morgan (Steve Burton) and Sonny Corinthos (Maurice Benard) will have another problem on their hands. After Kristina Corinthos-Davis (Lexi Ainsworth) swipes Alexis Davis’ (Nancy Lee Grahn) phone and calls Valerie Spencer (Paulina Bugembe), there’s going to be trouble.

Valerie will realize Kristina needs help, so she’ll kick off an investigation with Harrison Chase (Josh Swickard). While they search for answers about Kristina’s whereabouts, Josslyn Jacks’ (Eden McCoy) pain will take a toll. She’ll lash out at Cameron Webber (William Lipton), but her anger will probably just be grief-driven. Oscar Nero (Garren Stitt) will rapidly decline soon enough.

General Hospital spoilers say Jason will show up to visit Oscar. He’ll promise to do whatever Oscar needs as the end of his life approaches. Jason won’t want Oscar to feel like he’s leaving any big issues behind. He’ll only want peace for this dying teen.

Later, Oscar will have a task for Cam to accomplish. This might involve looking after Joss once he’s gone or even making a eulogy so the others don’t have to. Oscar’s been trying to get everything squared away as far as his funeral goes. He just doesn’t think Dr. Kim Nero (Tamara Braun) and Drew Cain (Billy Miller) should have to handle a task that tough.

That’s why Olivia Quartermaine (Lisa LoCicero) and Ned Quartermaine (Wally Kurth) will keep taking the lead. Carly Corinthos (Laura Wright) will also seek support from Bobbie Spencer (Jaclyn Zeman) and get a distraction thanks to Sonny. Over with Lulu Falconeri (Emme Rylan), she’ll return to Port Charles on a surprising mission. Peter August (Wes Ramsey) will be curious about what Lulu’s got up her sleeve.

During the week of April 29-May 3, Franco Baldwin (Roger Howarth) will want to be there for Drew. They’ll have a nice bonding session while Kim leans on Julian Jerome (William deVry). Elizabeth Webber (Rebecca Herbst) will also reach out to Dr. Terry Randolph (Cassandra James), so she may want to see how this doc’s holding up. Losing a young patient can’t be easy, especially when Kim’s on staff at GH.

Elsewhere, Shiloh will make waves for Willow Tait (Katelyn MacMullen) again. He’ll continue to harass her, but Chase will refuse to let anything bad happen to her. Next, Jordan Ashford’s (Briana Nicole Henry) kidney issues will become too much to bear. She’ll suddenly keel over, so it sounds like she’ll be rushed to GH ASAP. Jordan can’t go too long without the kidney she’s desperate for.

Other General Hospital spoilers say Ava Jerome (Maura West) will get a startling phone call. It’ll leave her paranoid since Ryan Chamberlain (Jon Lindstrom) is still out there. Over with Sam McCall (Kelly Monaco), she’ll feel like enough is enough. Sam’s determination will rev up as she fights to destroy Shiloh as soon as possible.