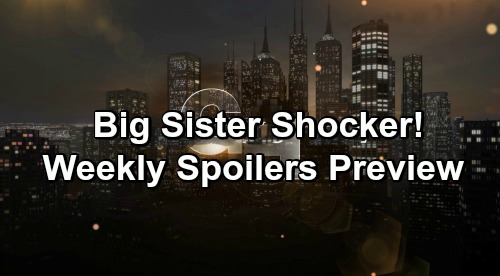 General Hospital (GH) spoilers preview for the week of April 22-26 tease that some shockers and shakeups are on the way. For starters, Molly Lansing-Davis (Haley Pullos) will be as fierce as ever. She’ll be on a mission to track down Kristina Corinthos-Davis (Lexi Ainsworth), so she’ll definitely stir up some drama for Sonny Corinthos (Maurice Benard), Jason Morgan (Steve Burton) and Sam McCall (Kelly Monaco).

Sam will face some trouble of her own as she tries to keep up her ruse. She’ll find herself in a tight spot with Shiloh Archer (Coby Ryan McLaughlin), so she’ll have to decide how far she’s willing to take her scheme. Will Sam let this turn romantic for Kristina’s sake? Jason wouldn’t like it, but a big sister’s gotta do what a big sister’s gotta do! GH fans will be eager to see how Sam handles this crisis.

Other General Hospital spoilers say Jason and Shiloh will face off. There’ll be another major confrontation between them, but Jason will likely hold back this time. He left Shiloh bloody after their last showdown, but there’s more at stake now. Jason can’t give Shiloh anything he can use to his advantage. Protecting Kristina is just too important.

Over with Alexis Davis (Nancy Lee Grahn), she’ll face a distraction and lean on Dr. Neil Byrne (Joe Flanigan) for comfort later. Meanwhile, General Hospital spoilers state that Sonny and Jason will have to figure out a new plan. Will Kristina give them the slip – at least briefly? If so, maybe she won’t get too far.

Next, let’s talk about the slightly meddlesome Carly Corinthos (Laura Wright). She’ll meet Sasha Gilmore (Sofia Mattsson) and most likely embarrass Michael Corinthos (Chad Duell), but that won’t stop the steaminess. Michael and Sasha will share some hot scenes in the week ahead, so stay tuned.

Across town, Lulu Falconeri (Emme Rylan) will be back to drop a bomb on Peter August (Wes Ramsey). Oscar Nero (Garren Stitt) will also continue moving toward his inevitable death. He’ll have a significant conversation with Jason as well as one with Cameron Webber (William Lipton). Oscar will hope Cam can grant his dying request, so Cameron should agree to whatever his friend’s asking.

This may involve Josslyn Jacks (Eden McCoy) and helping her let go once Oscar’s gone. Cam would love to be Joss’ boyfriend down the road, so Oscar may suggest he hopes for that, too. We’ll give you updates as other GH news comes in. Stick with the ABC soap and don’t forget to check CDL often for the latest General Hospital spoilers, updates and news.