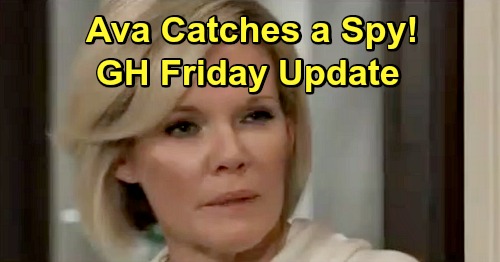 General Hospital (GH) spoilers for Friday, April 19, tease that Ava Jerome (Maura West) will catch someone who’s been tailing her around town. She’ll seem agitated as she asks how long this person’s been following her. Maybe Scott Baldwin (Kin Shriner) decided to keep an eye on Ava and make sure she didn’t do anything crazy. He knows she’s been pretty out of sorts since the truth about Ryan Chamberlain (Jon Lindstrom) came out.

Regardless, Ava will seek a favor from Scott on Friday. It looks like she’ll want him to play the part of the doting boyfriend. Ava needs someone who can make Ryan jealous, so Scott’s an easy choice. Of course, this is also an incredibly dangerous plot. General Hospital spoilers say Scott won’t be on board, so Ava will pursue another fake beau next week.

In the meantime, Curtis Ashford (Donnell Turner) will discuss his investigation with Jordan Ashford (Briana Nicole Henry). He’ll realize there may be a better tactic he can use. Curtis will determine that if they want to locate Ryan, they should seek out the person who helped him live. There has to be an accomplice who could offer more information.

Speaking of more information, that’s exactly what Jordan will want from Franco Baldwin (Roger Howarth). General Hospital spoilers say she’ll pay Franco a visit, so he’ll wonder if she’s going to cause trouble for him again. Jordan won’t have anything too crazy in mind, but she’ll definitely want to chat. Franco may be able to help Jordan with something that’s presumably Ryan-related.

GH fans know Franco’s already been helpful lately – at least he’s tried to be. He went to Nina Reeves (Michelle Stafford) and pushed her to talk Charlotte Cassadine (Scarlett Fernandez) into being Aiden Webber’s (Jason David) pal. It appears Laura Webber (Genie Francis) will learn part of the plan on Friday. When she mentions it to Elizabeth Baldwin (Rebecca Herbst), Liz will assume this was Franco’s idea.

Although it’s tough to believe this will solve Aiden’s problems, Liz will love that Franco’s looking out for him. They’ll just have to keep supporting Aiden as best they can. Next, Liesl Obrecht (Kathleen Gati) will get grilled by Maxie Jones (Kirsten Storms) and Peter August (Wes Ramsey). Since they believe Sasha Gilmore (Sofia Mattsson) is in the clear, they’ll be even more curious about Dr. O’s leverage.

Nina thinks she knows what that leverage is, but it’s only because Valentin Cassadine (James Patrick Stuart) lied again. He claims Liesl’s holding the truth about Cassandra Pierce (Jessica Tuck) over him. Nina will fret about the secret that could ruin them, but Valentin will brush off the threat. He’ll assure Nina that he’s got everything under control, but that may not be the case for long!

Other General Hospital spoilers say Michael Corinthos (Chad Duell) will pry a confession out of Sasha. After they run into each other at the boxing gym, Sasha will suffer a little sprain. Michael will gladly assist Sasha with her ice pack and push her to admit she likes him. They’ll share a kiss and even take it step further once Monday rolls around.

Some terrific scenes are coming up on General Hospital. We’ll give you updates as other GH news emerges. Stay tuned to the ABC soap and don’t forget to check CDL often for the latest General Hospital spoilers, updates and news.