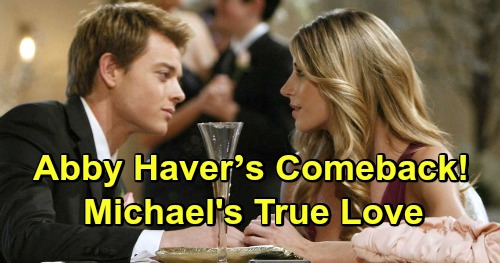 General Hospital (GH) spoilers tease that Michael Corinthos (Chad Duell) needs his perfect match, and he may have already found her. The problem is she’s dead, but that’s very fixable on a soap. Should GH bring back Abby Haver (Andrea Bogart)? They should if they want Michael in a stable, loving romance!

Death can’t keep most General Hospital characters down, so there’s no reason for it to keep down Abby. It’d be easy for GH writers to undo her deadly exit and set up her return. Abby made Michael happier than he had ever been with anyone else. The chemistry between Duell and Bogart was out of this world.

Abby came along after Michael’s rape and helped him deal with all his insecurities afterward. It brought a very natural connection and made it seem like Michael truly belonged with Abby. 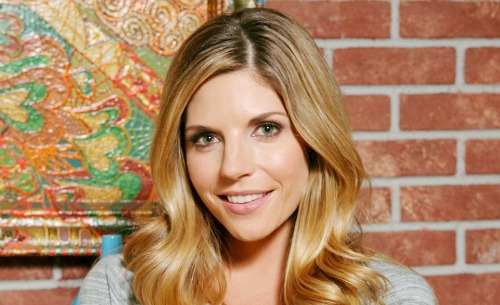 Michael fell for Starr Manning (Kristen Alderson) but after a while, she left town and Michael was alone again. Although Michael loved Starr, they couldn’t measure up to the couple that Abby and Michael were.

Michael got over Starr without much trouble and moved on with Kiki Jerome (Kristen Alderson, Haley Erin). Kiki ended up with Michael’s brother, Morgan Corinthos (Bryan Craig), so that relationship was a bust as well. Sabrina was a fan favorite and a decent match for Michael until she lied to him about her baby’s paternity. Poor Michael ended up losing the child he thought was his.

Michael loved Teddy and was incredibly upset when he gave him up to Carlos’ brother to raise. Despite the bond that Michael and Sabrina once had, it’s clear that Michael deserved better. Then, Nelle Benson (Chloe Lanier) came along to offer Michael more deception. She pretended to be a loving person, but she was just a user. Nelle’s manipulation is still wrecking Michael’s life to this day.

Michael was attracted to Willow Tait (Katelyn MacMullen) right off the bat, but Willow is with Michael’s friend, Harrison Chase (Josh Swickard). Now we have Michael and Sasha Gilmore (Sofia Mattsson), who’s part of Valentin Cassadine’s (James Patrick Stuart) fake daughter con. Sasha’s deceiving Nina Reeves (Michelle Stafford) and everyone else in the process, so she’s not a great pick for Michael.

Where are the honest, stable women that Michael can rely on? Michael hasn’t had any prospects in that department since 2012. This General Hospital character needs a loyal gal who loves Michael for who he is and not what he can do for her.

Michael’s one true love will always be Abby. She could’ve easily been placed in an institution somewhere by Anthony Zacchara. GH writers could simply have her finally escape, much like Jason Morgan (Steve Burton) did from Russia. No matter how General Hospital might choose to do it, Michael needs Abby in his life again. They could rekindle their love and raise his son together.