General Hospital Spoilers: Do You Want Willow with Michael or Chase – ‘Millow’ vs ‘Chillow’ 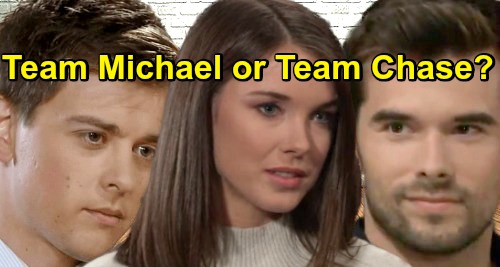 General Hospital (GH) spoilers tease that Harrison Chase’s (Josh Swickard) blissful bubble is about to pop. GH fans know Chase fell fast and hard for Willow Tait (Katelyn MacMullen). She’s already captured his heart, so he’s all in on seeing where this leads. Chase clearly hopes they’ll be building a bright future together, but not so fast! What about Willow’s growing bond with Michael Corinthos (Chad Duell)?

Michael has expressed interest in Sasha Gilmore (Sofia Mattsson), and she’ll return the favor soon enough. They’ll share some steamy moments before long, but we all know that pairing’s doomed. Michael’s last relationship was with a manipulative, lying con artist. The last thing he wants is another one!

Unlike Nelle Benson (Chloe Lanier), Sasha is sane and genuinely sorry for her terrible deception. However, Michael’s been burned and probably won’t be on board for another round of distrust. Plus, GH can play up the angle of “What kind of person would lie about someone’s child?”

Michael will be outraged over what Sasha did to Nina Reeves (Michelle Stafford), which will set up his own outrage for when the truth about “Wiley Cooper-Jones” comes out. For now, Michael and Willow’s connection is growing stronger. Willow is even keeping secrets from Chase for Michael’s sake. She gave Chase the vague excuse of “helping a friend” when he called to ask about a dinner date.

Chase is bound to feel left out as Michael and Willow’s friendship strengthens. Willow may make some progress with Kristina Corinthos-Davis (Lexi Ainsworth), which would make Michael’s feelings grow stronger. He touched her hand tenderly during their last chat and was quite understanding about why she misled him about the baby. Michael really connects with Willow on a deep level.

Some General Hospital fans might be rooting for “Millow” over “Chillow” at this point! Of course, smitten Chase was been awfully fun to watch. Willow and Chase’s recent love scene was pretty sizzling, so they’ve got some supporters, too.