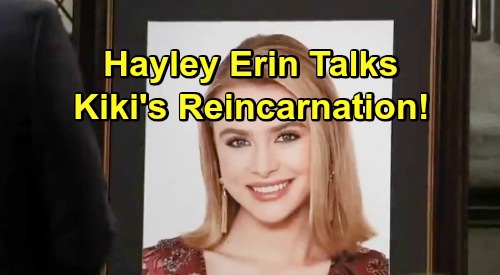 General Hospital (GH) spoilers has some news to pass on about Hayley Erin, who recently departed her role as Kiki on GH. As viewers know, Kiki met her fate at the hands of serial killer Ryan Chamberlain (Jon Lindstrom). It seems that Hayley is still keeping up with GH, and she even poked a little fun at the demise of her character on social media.

Hayley responded to a video tweet put out by GH of Epiphany (Sonya Eddy) singing “Live On” at Kiki’s funeral service. In response, Hayley tweeted: “Wow, @TheRealSonyaEd, what a beautiful tribute to Kiki.” And Hayley is so right; the song was touching and no doubt brought many viewers to tears.

But Hayley also gave viewers a little inside information on what exactly happened to Kiki. This is something that many viewers have been wondering about, since we didn’t witness Kiki’s actual murder. Hayley humorously offered this: “P.S. She was reincarnated as a Golden Retriever and is living her best puppy life.”

Hayley’s followers have been having fun with her good-natured comment. One replied, “I think Golden Retriever Kiki should visit Ryan and bite him for killing her!” Another said, “No dog lives a better life than a golden puppy! So have fun!!”

And one follower joked back at Hayley, saying, “I mean I love goldens. But is it too early to mention that she’s exchanging one short life for another?” Hayley then replied, “I did have this thought…but she’s living it in dog years so it’s chill.”

Are you already missing Kiki on GH? Stay tuned to the ABC soap and don’t forget to check CDL often for the latest General Hospital spoilers, updates, and news.

Wow, @TheRealSonyaEd, what a beautiful tribute to Kiki.
PS. She was reincarnated as a Golden Retriever and is living her best puppy life. https://t.co/i8PtcYvbJd